Warning: "continue" targeting switch is equivalent to "break". Did you mean to use "continue 2"? in /nfs/c09/h02/mnt/208785/domains/travelingoutloud.com/html/wp-content/plugins/revslider/includes/operations.class.php on line 2722

Warning: "continue" targeting switch is equivalent to "break". Did you mean to use "continue 2"? in /nfs/c09/h02/mnt/208785/domains/travelingoutloud.com/html/wp-content/plugins/revslider/includes/operations.class.php on line 2726

Warning: "continue" targeting switch is equivalent to "break". Did you mean to use "continue 2"? in /nfs/c09/h02/mnt/208785/domains/travelingoutloud.com/html/wp-content/plugins/revslider/includes/output.class.php on line 3624
 A Toast to Skydiving | Traveling Out Loud 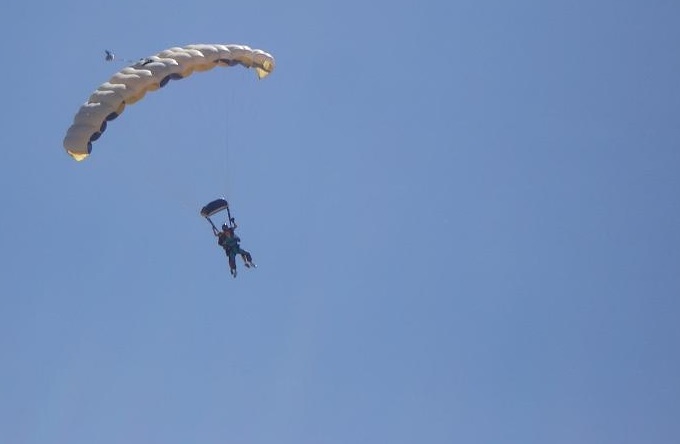 
“Cheers,” a group of us shouted beaming with sloppy grins as we clinked our shot glasses of tequila together, “to skydiving!” And that’s the reason I found myself jumping out of a small rickety plane two miles from the ground one week later. 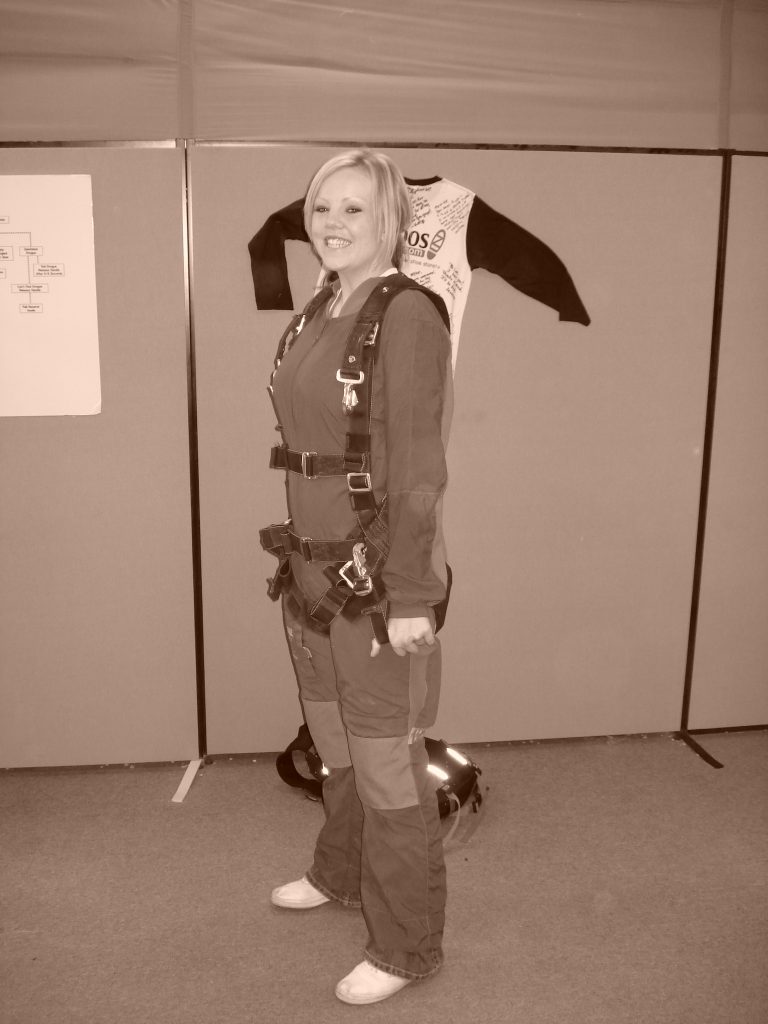 I never had the desire to skydive, and I never felt the need to prove anything to anyone. I love adventure and often find myself doing risky things, but, skydiving never appealed to me and seemed chock full of unnecessary risk and fear. But for some reason, I found it important to honor a drunken pact made at a night at the pub not even knowing if anyone would even remember it the following day.

The night started out as normal as any other, and I don’t even know who suggested it, but someone did, and everyone else jumped in about how much they have always wanted to skydive. Next thing I know, the suggestion is picking up speed and growing beyond itself like a snowball rolling down a hill, “We should all go together”, “We should make a pact”, “Brandy, are you in?”

”….well, it’s not on my bucket list (I have a rather extensive bucket list), but I suppose I’m not opposed to not skydiving.” It likely sounded just as disjointed as that since we were already a couple shots in. I have this habit of just saying yes to adventure, which has made for some pretty remarkable experiences. And so, I was “locked” in.

As fate would support this drunken promise, one of the guys in the group worked in the concierge lounge at one of Las Vegas’ top hotel and casinos, The Palazzo, and the very next day while at work received a coupon for a skydiving place just outside of Vegas. By lunchtime, we were all booked for the coming weekend.

I was a little weary about doing skydiving on the cheap with a coupon. Some things you want to pay full price for under the assumption that they aren’t hurting for money and cutting corners on important life-saving equipment – but I had made a pact.

The night before our jump, we had a “last supper,” where we invited friends and family to dinner to say whatever they needed to say in the event something went wrong, and to strengthen each other’s solidarity to the pact. There is a restaurant that has a catholic themed dinner room, which seemed to compliment our theme well. 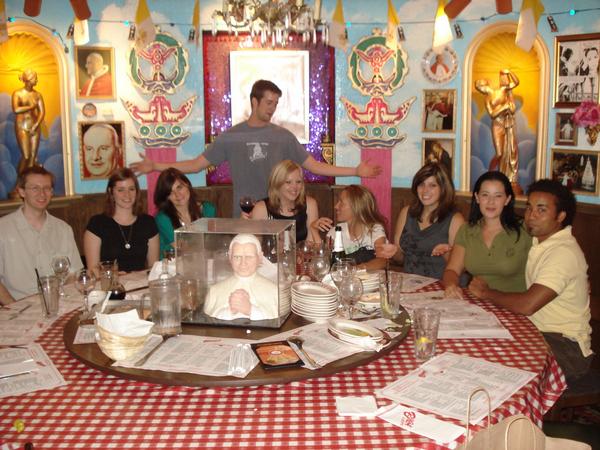 The next day, on the way to the launch point, I called my parents and told them what was about to happen. I figured the kindness would be to tell them last minute so the amount of time they would be worrying and the amount of time for them to talk me out of it would be minimized. They were not excited about it, but they drove out to watch and support me nonetheless.

After a safety video and suiting up, I met my tandem expert guide, and we boarded a ramshackle plane. We sat straddling thin metal benches holding on by a hand strap from the ceiling while the feeble plane chugged up into the air at a sharp angle. The side door to the plane was open the whole time, a constant reminder of my impending fate and a constant fear that at anytime any slight release of my grip on the hand strap could send me flying prematurely out of the plane. 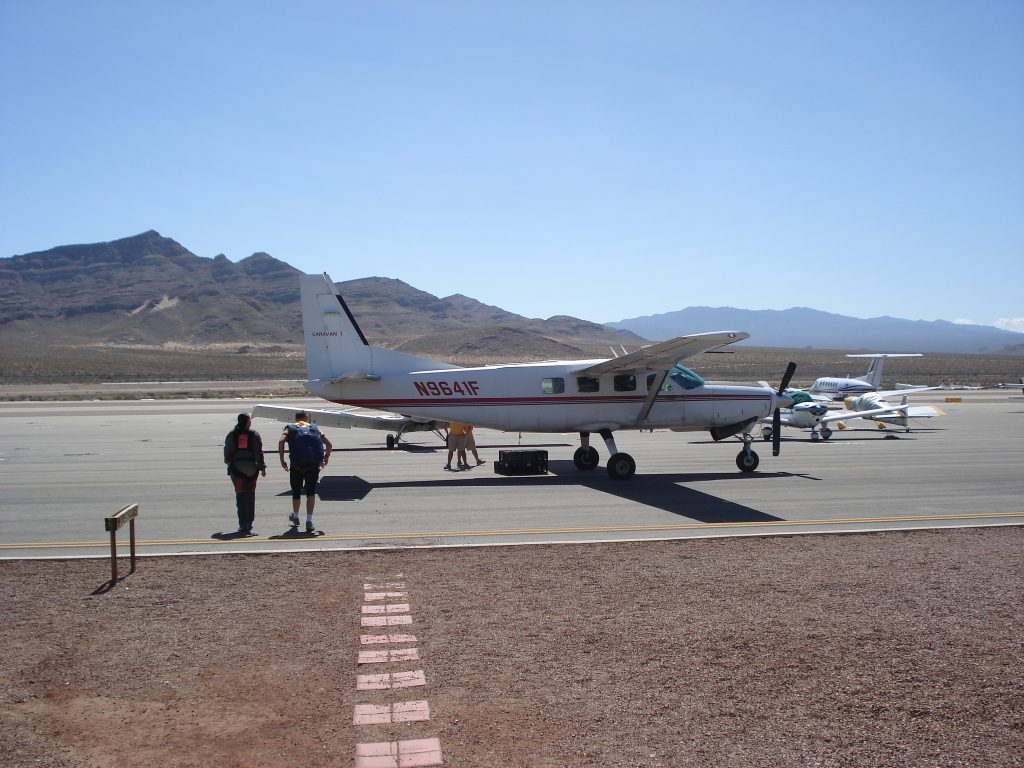 Because I was the last one to board the plane, that meant I would be the first one to jump out of it. Truth moment, I was terrified. The only way I was able to get in the plane to start with was because I mentally tricked myself into not thinking about it and assuming it was never going to happen, kind of like when you were a kid and you told yourself monsters couldn’t get you if you stayed under the covers. But, things get real fast when you are in the plane and kneeling at the edge of the door looking down at the vast landscape.

The wind was furious. I didn’t know that skin could stretch that much, as my cheeks were ballooned out so much you could have fit a tennis ball under each one.

Logically, I knew I was racing towards the ground, but when you are up that high, until a certain point, the distance from the ground seems to remain constant. So it just seemed like I was suspended in the air. The only physical way I knew we were falling was the wind and that my ears were aching from the extreme atmospheric pressure changes.

I thought there would be this cool dip in my stomach like the ones you get from a roller coaster, but that was not the case. There were two distinct phases, the first was just ferocious wind, and the second was peaceful floating after the parachute is released.

My favorite part was after the parachute was released. Fortunately, I do not have a larger than normal fear of heights, so the fear that should have come with only falling less slowly due to a parachute holding me up, did not settle in, and I was able to enjoy the view and the insurmountable freedom and euphoria you get cutting through the sky. 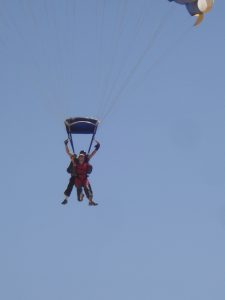 There are three main points that cause injury or death while skydiving – the plane crashing, a parachute failing due to malfunction, human error, or weather, or botching the landing. Messing up the landing is where most injuries happen as people land wrong, don’t pick up their legs, or hit a tree, bush, or, in the area I was skydiving, a cactus. Fortunately, our landing was smooth and without injury. 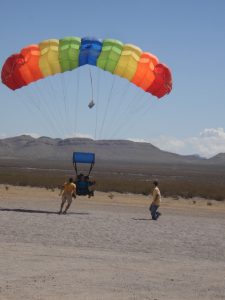 Everyone’s jump went well, and we had a proper celebration over sushi right after. What none of us counted on was the inevitable adrenaline dump that we would experience. Adrenaline rushes happen in intense situations accompanied with overwhelming fear, it’s the fight-or-flight mechanism, and usually intensifies speed, strength, pain tolerance, and tunnel vision and hearing. It is the body’s response in situations where survival is needed, but after a surge, your body can experience falling blood sugar, dropping heart rate, shakiness, extreme fatigue, mental confusion, sudden emotional swings, and potential faint spells. 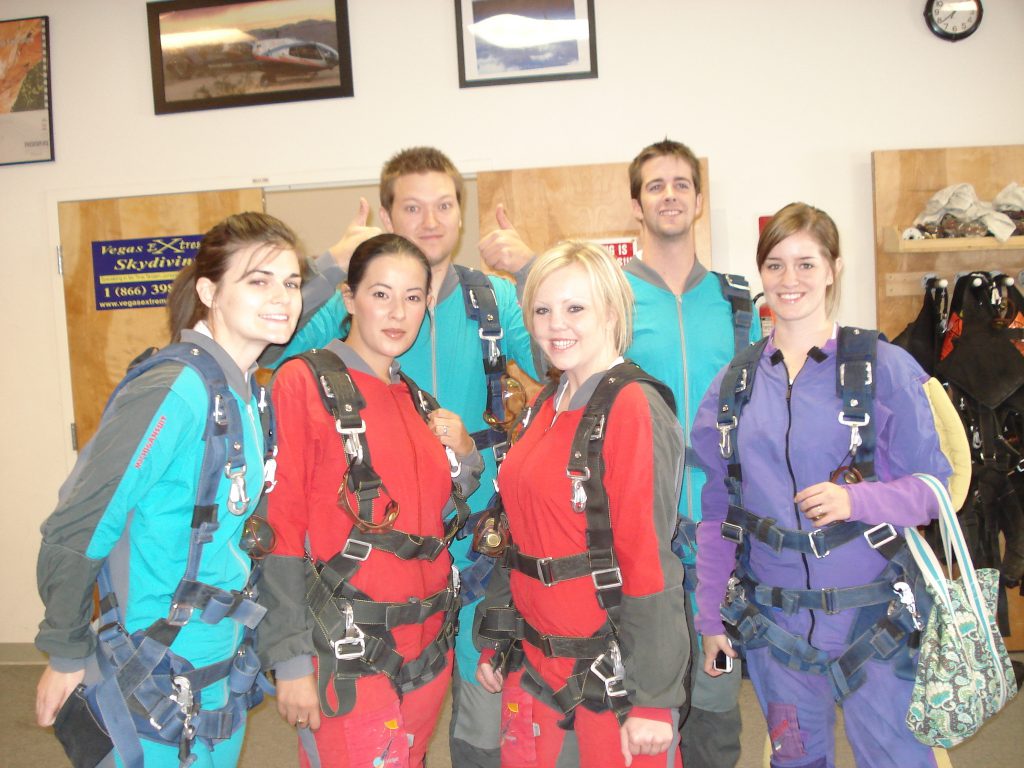 After our excitement dissipated, our first accounts of our harrowing experiences were shared, and our bodies recognized that we were out of immediate danger, the adrenaline responses came rushing in – we all almost fell asleep into our soy sauce dishes. I could barely keep my eyes open, or lift my chopsticks to grip a sushi piece. We might as well have been Dorothy running through the poppy field towards the Emerald City.

I would not actively try to seek out the opportunity again like I would bungee jumping, bungee jumping is awesome, but I would say yes if a situation, or a pact over shots, presented itself again.

Would I recommend it? That’s up to you, but I do recommend saying yes to adventure, saying yes to opportunity, saying yes to the things that scare you. Life is better lived at its edge, then back in the “safe harbor.” Going to that edge allows you to live your life to its limits, and make the most of it. Everyone’s edge is different, but you’ll never know your’s unless you go to it and dance on it.