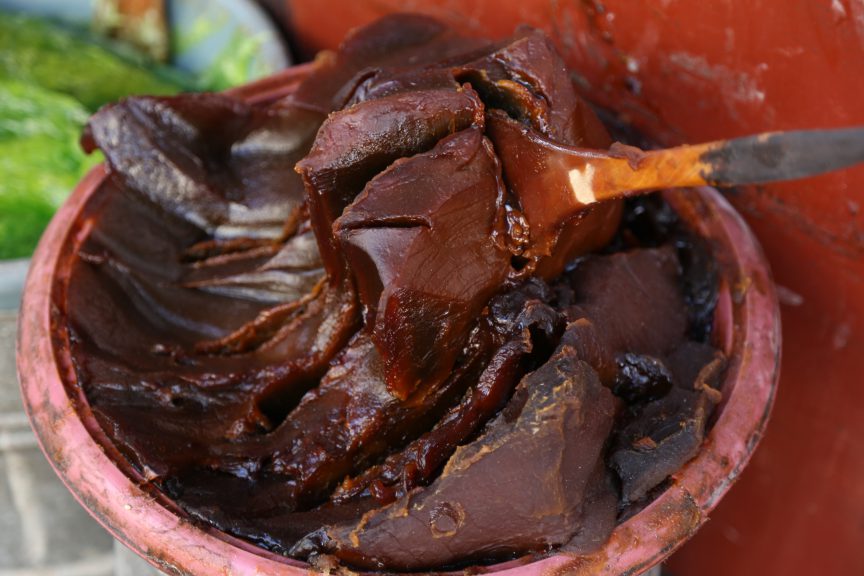 
I stood silent with three of my friends at the bottom of the plain unassuming steps that led up to the local hammam in Fez. With my wet hair wrapped in a pink and orange scarf and my skin shiny and bright pink, I stood contemplating and trying to grasp what just happened to me and how I felt about it. The bustling city continued on, unaware that I was in slight shock. One thing I knew to be true, I was just vigorously scrubbed by a partially naked woman to some kind of clean. 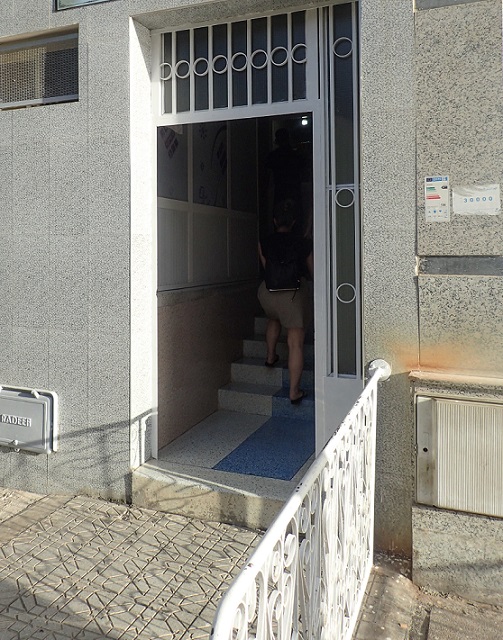 I read about the hammam in my Lonely Planet guidebook. I must have skipped over the parts that indicated the true experience of the hamman, because my expectation was completely different. I imagined a dimly lit cavernous room with a long rectangular shallow pool surrounded by grand marble archways. Next to the pool, I imagined three different rooms of varying hot temperatures, all dimly lit, with ornate mosaics, a fountain on the wall, marble tiered benches, and a slight steam in the air. I imagined it to be quiet, relaxing, and personal with maybe some quiet conversations between friends.

I memorized the procedures so as not to look too out of place. First, you take two buckets and fill one with hot water and the other with cold and take a seat in one of the rooms. You spread the famous black soap, a soap made from olives, all over your body, everyone is stripped down to just their underwear, and let it sit on your skin in the heat for 10 to 15 minutes. You rinse off the soap, and then don a coarse mitt and begin to gently exfoliate your skin. If someone offers to scrub your back for you, it is polite to accept and reciprocate. You use the buckets of water to rinse and cool off. At this time you can leave and dry off, or proceed to wash your hair. That’s what I imagined. That’s what I read. That’s not what happened.

A hammam is also known as a Turkish bath, and is a derivative of the Roman bath. Many cultures historically and to this day have some sort of communal bathing or bathhouse, Japan has the onsen, Korea has the jimjilbang, Russia has the banya, among many more. They have historical significance, and have even become social epicenters where conversation flourishes and even business deals are made. They also provide a service to people in areas that do not have access to running water or personal bathing facilities.

I already knew I would be slightly out of my comfort zone. For one, in my culture, bathing is a very private activity. And for another, although our dress in the states would not be described as conservative, especially in Vegas, as a whole, we oddly shy away from public nudity. So, with just those two things alone, I already knew it would be a challenge for me to go to the hammam. But I’m one to embrace culture and experience, and so I found myself undressing in a room while a large woman with a grim expression sitting behind a register looked on. 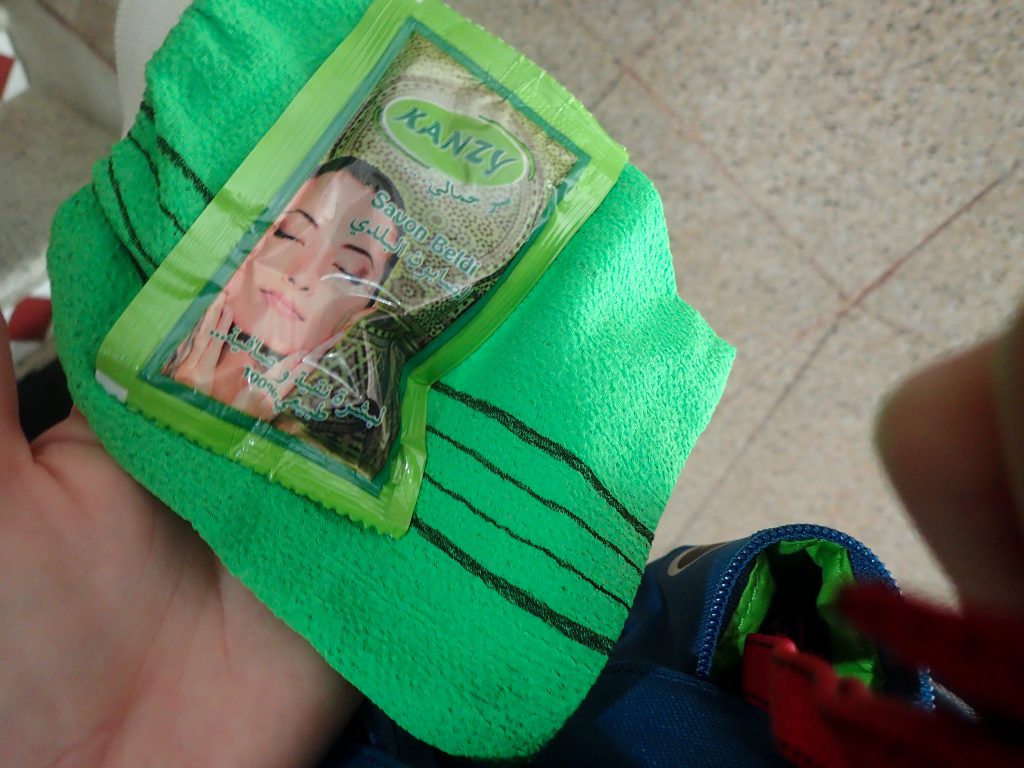 In just our underwear, the four of us entered the hammam. There were two well lit tiled rooms each with a basin of water fed by a water spigot in the corner and a drain in the middle. Local women, naked to their underwear, were sitting sporadically throughout the rooms in various stages of bathing. One woman was laying on her stomach while another woman was scrubbing her back. There were large colorful buckets of water near each person. Some were walking back and forth to the basin, filling them. It was warm and humid. This looked like a prison shower room.

We found a corner and sat on the moist tiled floor. A meaty woman with her hair wrapped in a white rag and with large bulbous breasts that lay over her protruding stomach, brought us several large buckets of water. She had an air of authority to her. My friend Sandy would call her, “The Top Dog.” She worked at this hammam, and I bet nothing happened in this place without her consent.

I started directing the others in what to do. This didn’t last long, as the lady came back and shook her finger at us. She didn’t speak any French, and none of us knew Arabic, so verbal communication was out and we were all at her mercy. She called in a friend and they began their work on two of my friends. I didn’t watch, as I was trying to give them some modicum of privacy. In my peripheral though, I could see what looked like some macabre cirque du soleil act. Her associate kept tapping me on the shoulder and showing me all the dead skin she was collecting from my friend. I wasn’t in awe though, because all it made me think of was the mounds of dead skin that likely inhabited the tile floor I sat on.

Next thing I know, the “Top Dog” is sitting with her legs spread in the shape of a V and she is calling to me while patting her thigh. I crawled over to her and tried to get her name, but to no avail. I thought I should at least try to be somewhat less stranger-like with her. She took my mitt and put it on, and I layed my head on her thigh. The vigorous scrubbing began. 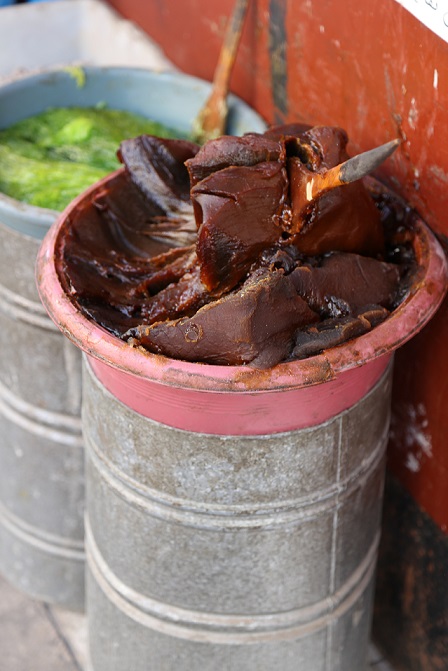 She started with my face, and then doused it with water. I kept my eyes closed, but not for long, as she tapped my face and shook her finger at me. I was to keep my eyes open the whole time, even when she flipped me over and my face was smashed into her stomach and her breasts slapped against my face as she scrubbed. For the next 20 minutes I would be flipped and scrubbed indiscriminately, and then doused with water. I would find myself on my stomach, eye level with the layers of skin of all those who scrubbed before me. She scrubbed my breasts and even pulled my underwear down to scrub my butt cheeks. Scrub. Douse with water. Scrub. Douse with water. And then it was done, or so I thought.

I got dressed in the changing room while the same large woman with the grim expression behind the register looked on. I knew the lady had done a service for me, a quite personal one at that, so I partialed out money to tip both her and the register woman for looking after my stuff. I’m from Vegas so it is almost bad karma not to tip. I gave them both their tips, and then the register woman started firmly speaking to the “Top Dog.” Next thing I know, she is shuffling over with her head bowed and giving the register woman her tip. I am not sure if they share tips, or what happened, but I do know that the lady I feared, feared this woman, which made me want to book it out of there even more. And I did.

Would I do it again? For the first time yes, but maybe not a second time, unless that particular hammam had some sort of historical age and significance, a reason beyond itself. I told this through my lens, the lens of someone who has never experienced anything like that before. I am very embracing of all cultures and cultural differences, so this is not in any way a negative commentary on the hamman, just a story about one girl thrown completely out of her comfort zone. And therein lies one of the beautiful reasons why we travel, to be out of our comfort zone, to learn a different culture, to open up our minds, to be accepting and understanding of different, to have our hearts and minds scrubbed to some kind of clean.

“Normality is a paved road, it’s comfortable to walk, but no flowers grow on it.” – Vincent Van Gogh