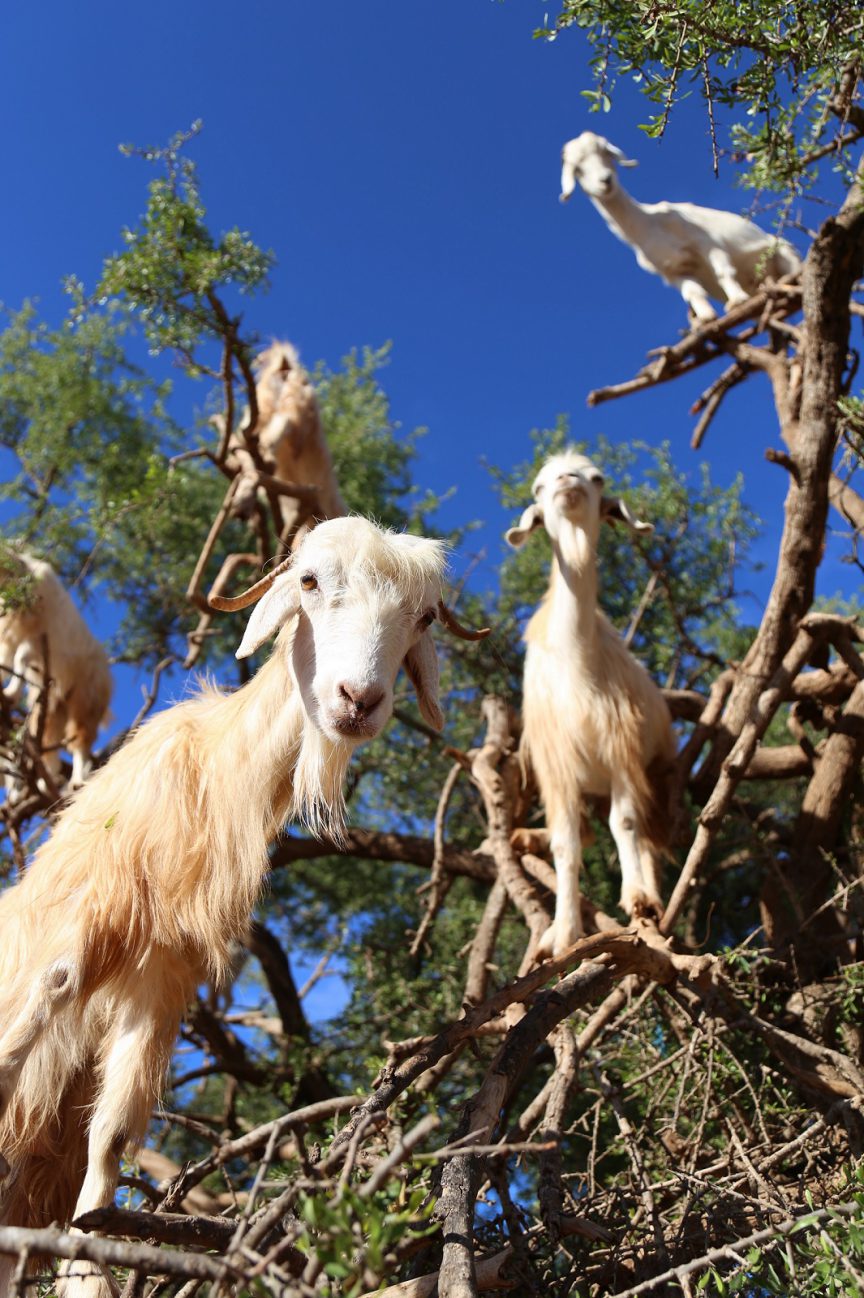 
On one of my long days driving through Morocco, I was passing through Argan Tree Country, where there are just miles upon miles of Argan trees. I was passively looking out the window, listening to music, and writing in my travel journal, when all of the sudden, there was a tree full of goats. 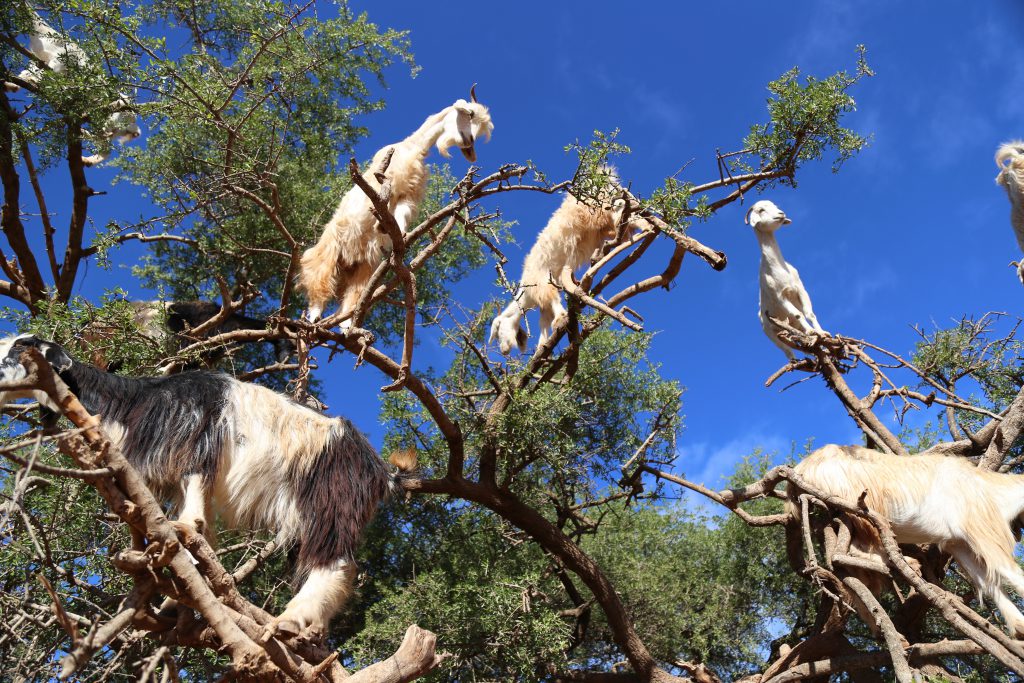 Goats in Trees in Morocco photo by Brandy Little

Argan trees are endemic to only one specific area in Morocco, the Sous valley, and because it is only naturally grown here, the area has become a UNESCO biosphere reserve. Its twisted thorny branches spread out far from its thin gnarled trunk providing a generous amount of shade, a perfect area for refuge from the sweltering temperatures that assault this area. 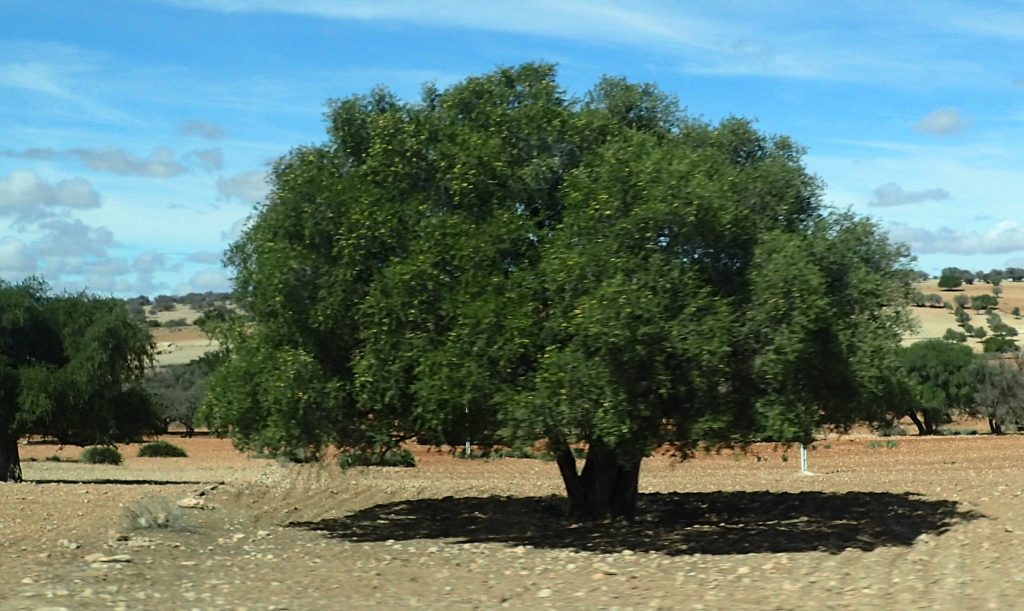 The reason the goats are hanging out on its branches though is for the leaves and the fruit. The fruit is a delectable choice of food for them, and a whole hoard of them will make their way up its typically 26 – 32 feet (8 to 10 meters) tall trunk and nimbly climb onto its branches to grab a bite.

With hoofed feet, it’s hard to think of goats as even remotely a good climber, but they are actually very adept climbers. Their hooves are convex and can actually spread out to grip the ground, and they have good traction to keep them from slipping. They can jump a distance of up to 12 feet (3.7 meters) and can even scale slopes at a 60 degree angle, that’s not that far from vertical. 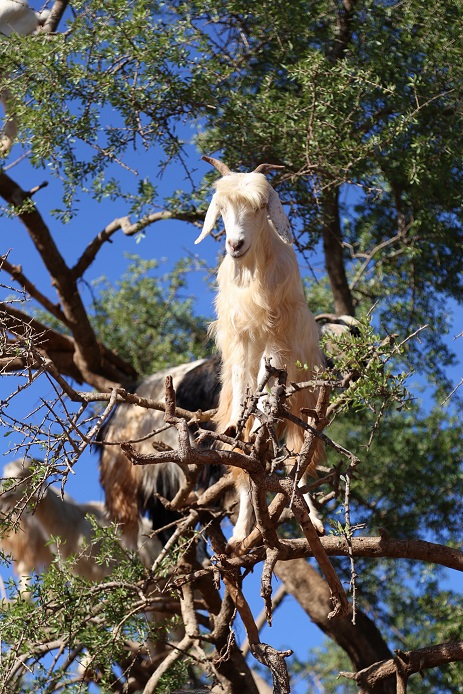 Goats in Trees in Morocco photo by Brandy Little

These goats also have to compete with humans for these fruit, because they produce Argan Oil, a popular oil for eating and cooking and for cosmetics. The oil comes from the inside of the nut that can be found at the center of the fruit. No useful mechanical means to extract the oil out has yet been created, so the oil is extracted by hand and it is a laborious task. First the fruit is dried, then the pulp is removed, and then the nut is cracked to retrieve the kernels. At this point they will roast the kernels if the oil will be used for culinary purposes. Then the kernels are placed in a stone grinder and ground using a hand crank. The stone grinder collects the oil and drains it into a bucket, and the leftover kernels are used for livestock feed. From there the oil is decanted for two weeks and filtered as needed, and then sent to the market. The oil is highly coveted in Morocco and abroad, and can cost upwards to 400 USD a liter. 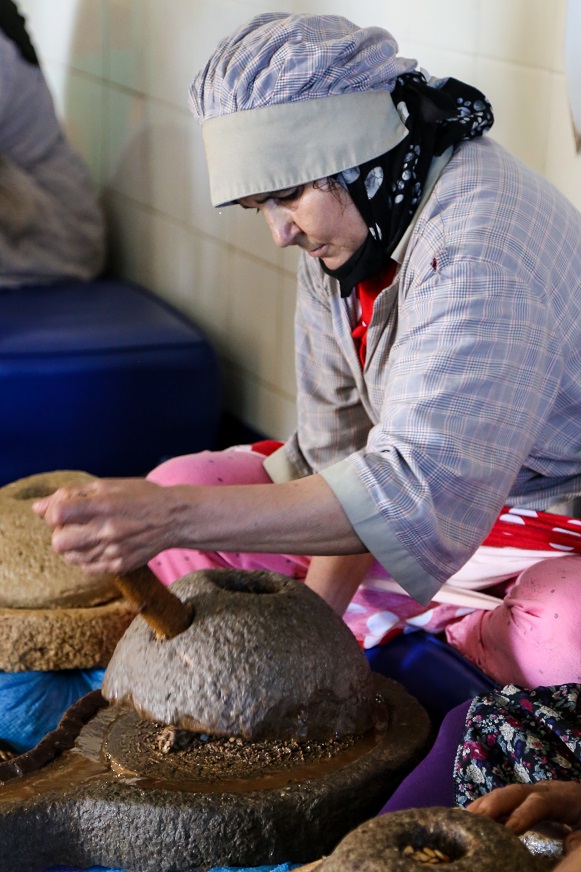 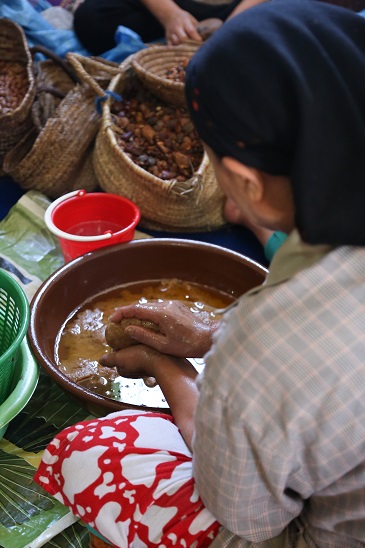 Traditionally, goats were part of the oil extraction process. Instead of drying out the fruit, people would collect the undigested nut from the fruit from the goats’ excrement. This is actually the more quick way of removing the pulp, but some consumers complained that it left a goat smell, so the drying out method was adopted. This also happens to help provide jobs to the local Berber woman that wouldn’t have work otherwise.

Berber’s are among Morocco’s earliest inhabitants, and are an indigenous people to North Africa. They have a rich history and are best known as “the free people.” The popularity and high cost of the Argan Oil has greatly helped the local Berber economy, and has employed thousands of women. The economic boost has given local farmers money to buy more goats, which make their way to more trees. And even though the trees are damaged when the goats climb them, no one is denying them their snack yet since the damage is offset by measures to protect the Argan tree population.

And as of now, I’m rethinking how I’m decorating my Christmas tree this year. 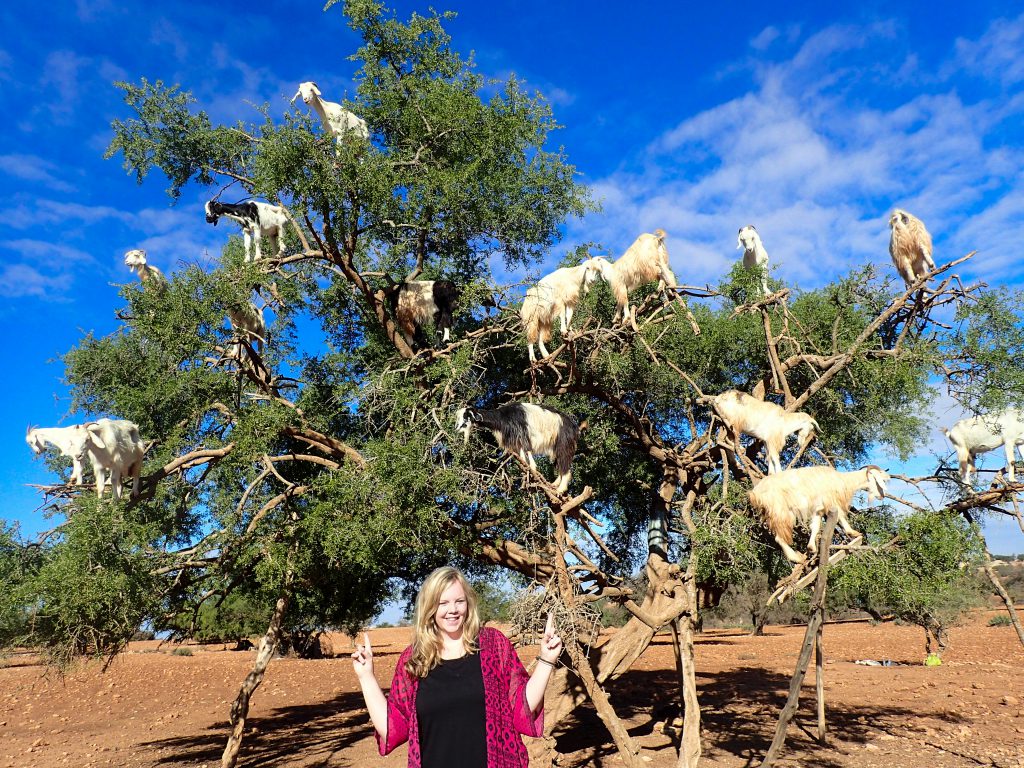 Mad Hatter: “Why is a raven like a writing-desk? Have you guessed the riddle yet?”