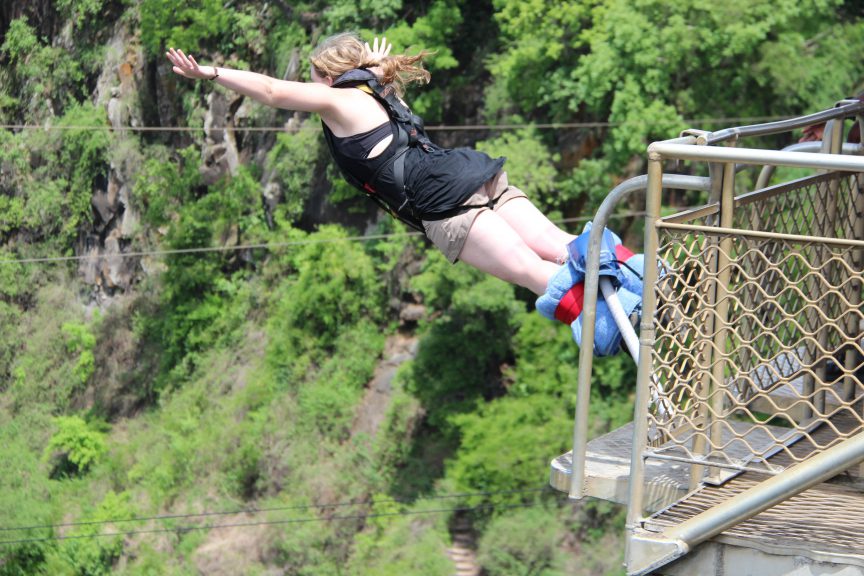 Bungee jumping was never even on my bucket list, but when you are in one of the top five places in the world for bungee jumping, it’s almost a crime not to. I signed the contract saying I understand the risk, and walked out to the middle of the Victoria Falls Bridge on the border of Zambia and Zimbabwe. 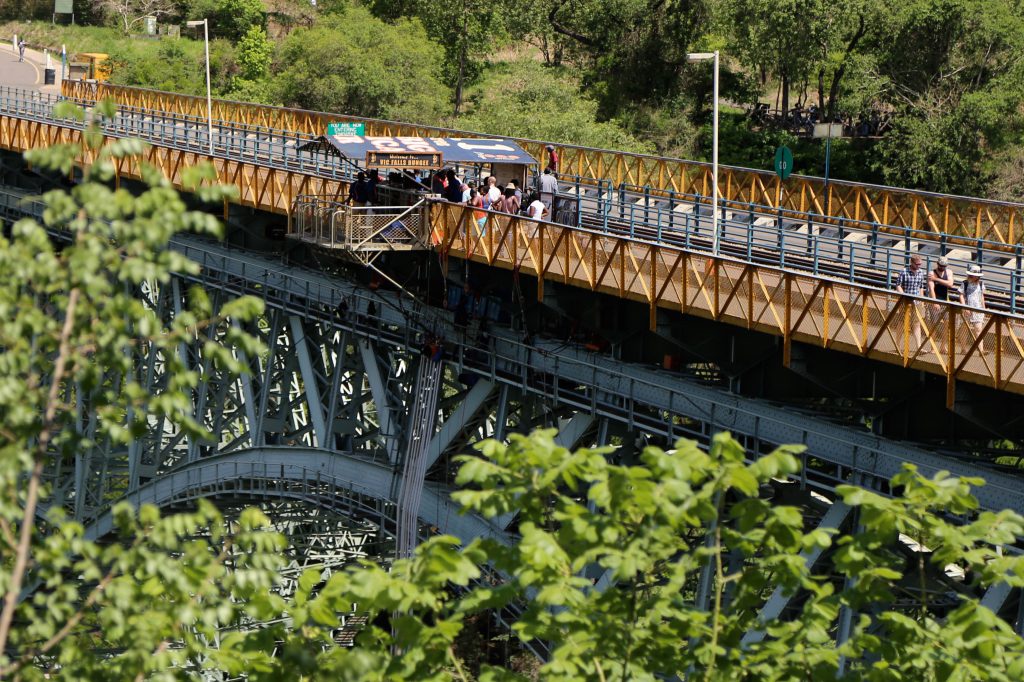 And I did understand the risk. While I never planned to do this, I did research it in the event that I did. That is just a thing about me, I research everything. I figure what you don’t know can hurt you, so it is at least better to know and still do it, then not to know and do it. So, I knew that in some cases severe whiplash, hemorrhaging eyes, temporary vision impairment, spinal compression fractures, herniated discs, quadriplegia, neck injury, and strangulation from the cord can occur. I also knew that sometimes the jumper can impact with the ground if the equipment malfunctions, the cord breaks, or the cord is measured too long. I was also aware that four years prior on this very bridge a jumper’s cord broke, she survived, but barely and not without injury. Further, I knew I was in an area lacking emergency services and quality healthcare facilities.

That all being said, I also figured that statistically the chance of an equipment malfunction was very low, as they have 50,000 plus jumps per year, and practically no reported issues.

I had a group of friends that I had met travelling there to support me, and one other friend who was jumping as well. I was terrified, but once you’re on the platform, there really isn’t any going back. The platform was a grate so I could see the Zambezi river below me, fed by the massive waterfalls on the other side of the bridge. The air was warm and the sun was shining. I had so many layers of sunscreen on I thought I would slide right out the straps, and at one point I thought I was going to. 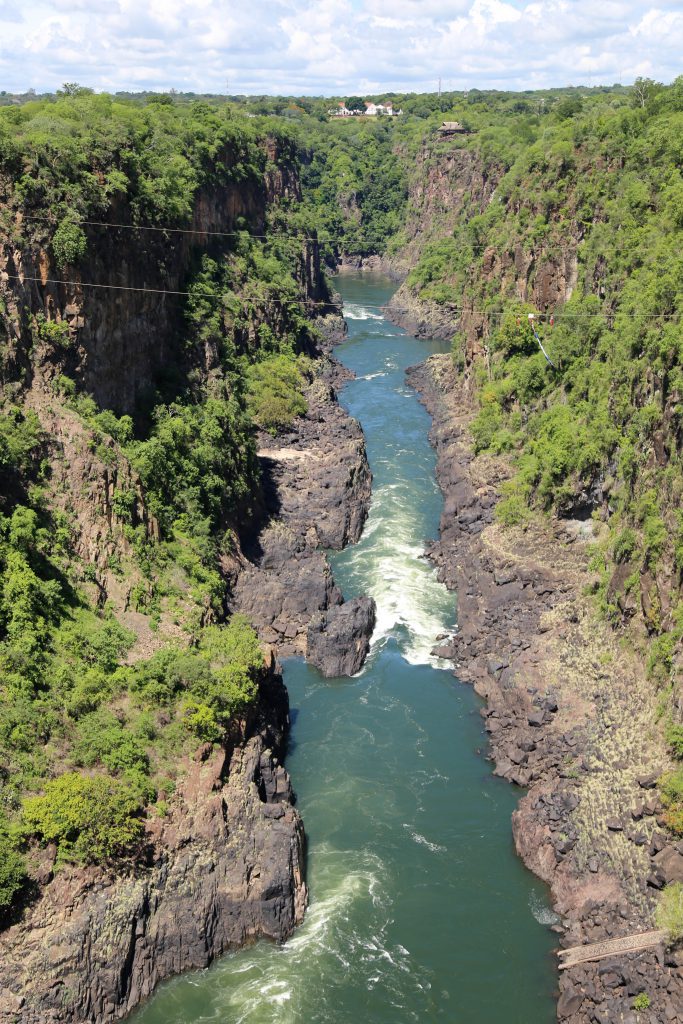 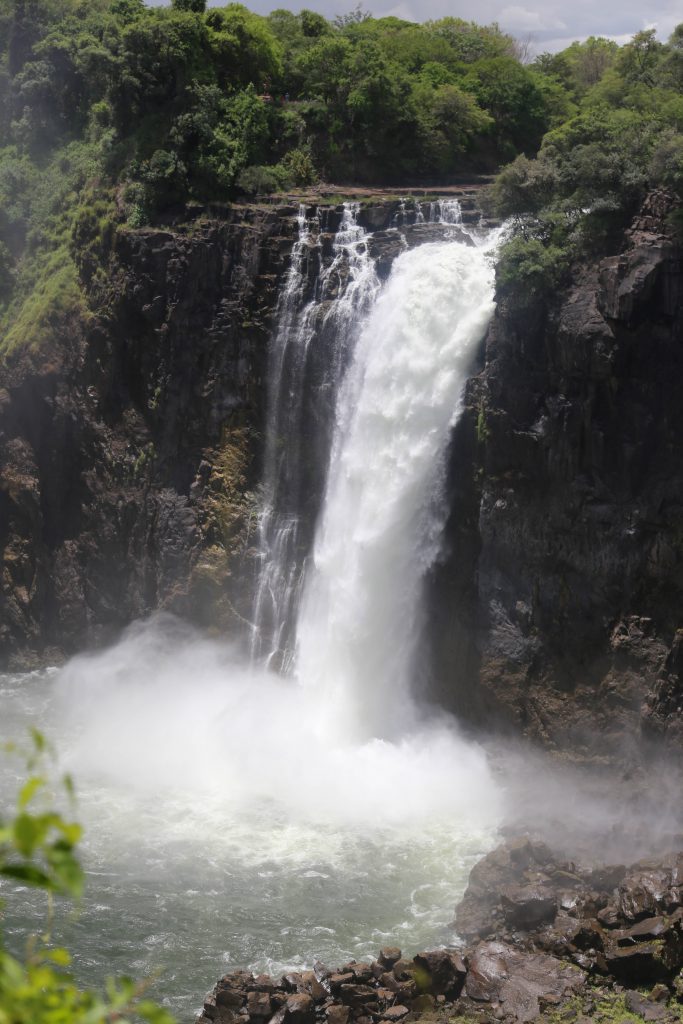 After they suited me up and me nervously checking everything they did, I waddled out to the edge of the grate and placed my toes over the edge. I knew that in order to reduce risk of injury, I needed to jump as far out and up as possible. I looked out through the gorge in front of me and to the cliff face beyond that –  my goal was to jump up onto that cliff. They counted down, 3…2…1…, and I leapt. 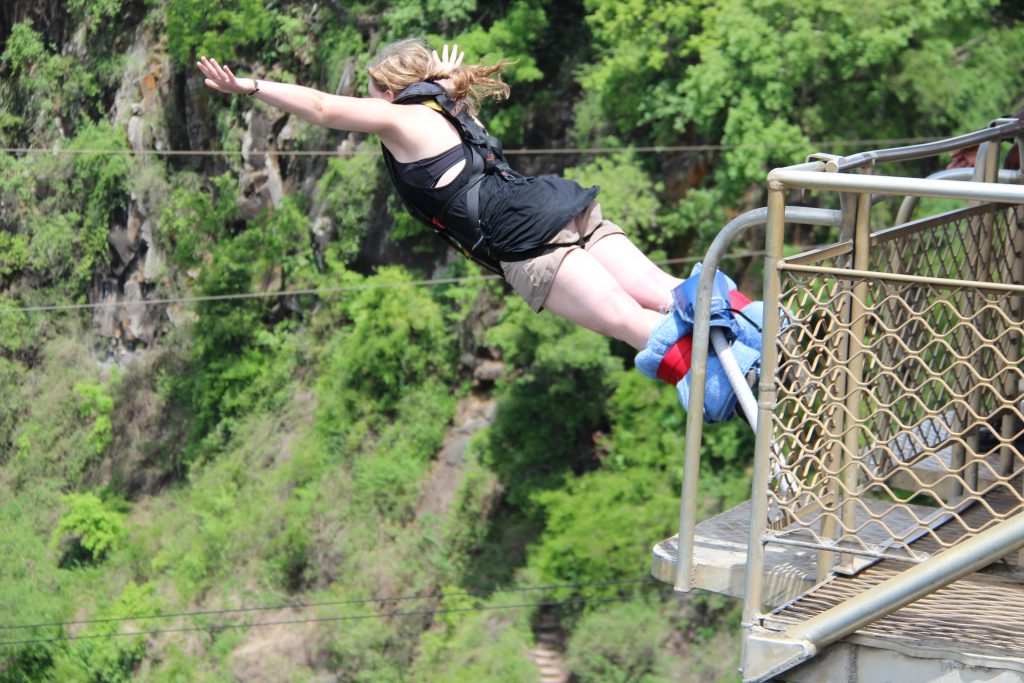 I imagined that it would feel like a violent car wreck, but it was the opposite. It felt like a couple of clouds were playing catch with me. It was exhilarating and utterly fun. I relaxed my whole body, so from the outside I look like a floppy rag doll, but it just amplified the free feeling of flying through the air. There is something therapeutic about letting go and submitting to the fear, the adrenaline, the jump, the movement, the fall, and the ride; there is something healing about not worrying about anything and simply enjoying the present. For a couple minutes, I was only falling up and down at the whim of gravity without any concern for anything else past, present or future in my life. 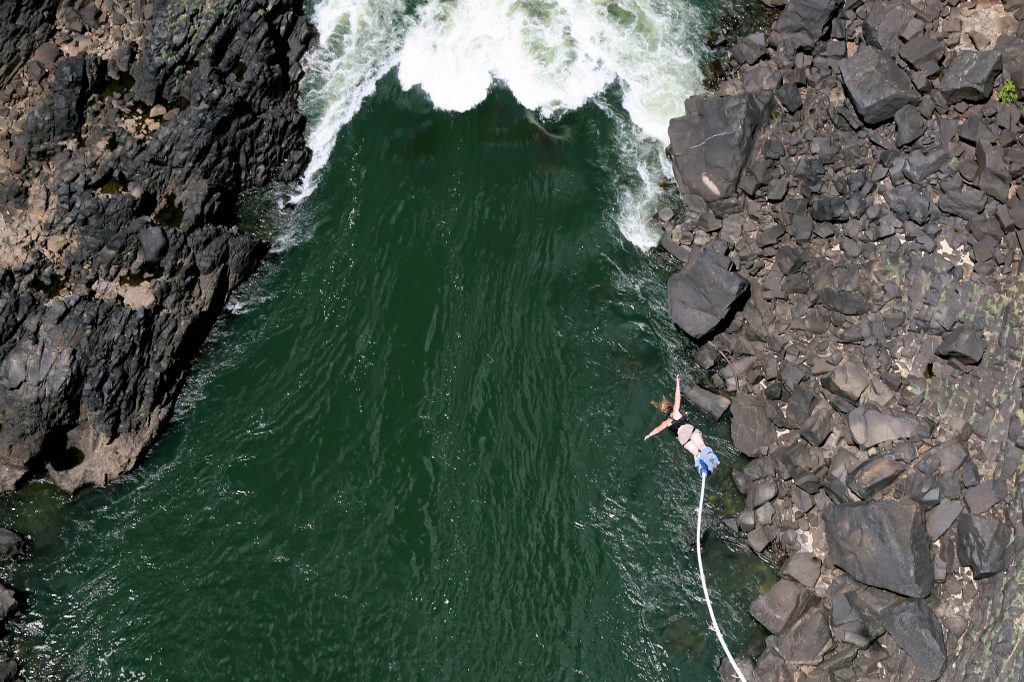 After 364 feet (111 meter) jump and springing back and forth, I climbed back up to the bridge. And, with adrenaline still coursing through me, I high-fived my friends.

Being so close to Zimbabwe, a couple of us, went to the other side to explore the falls in a different way. Even though it was the dry season, the falls were still beautiful and gushing. As luck would have it, we saw some friends on the Zambia side. 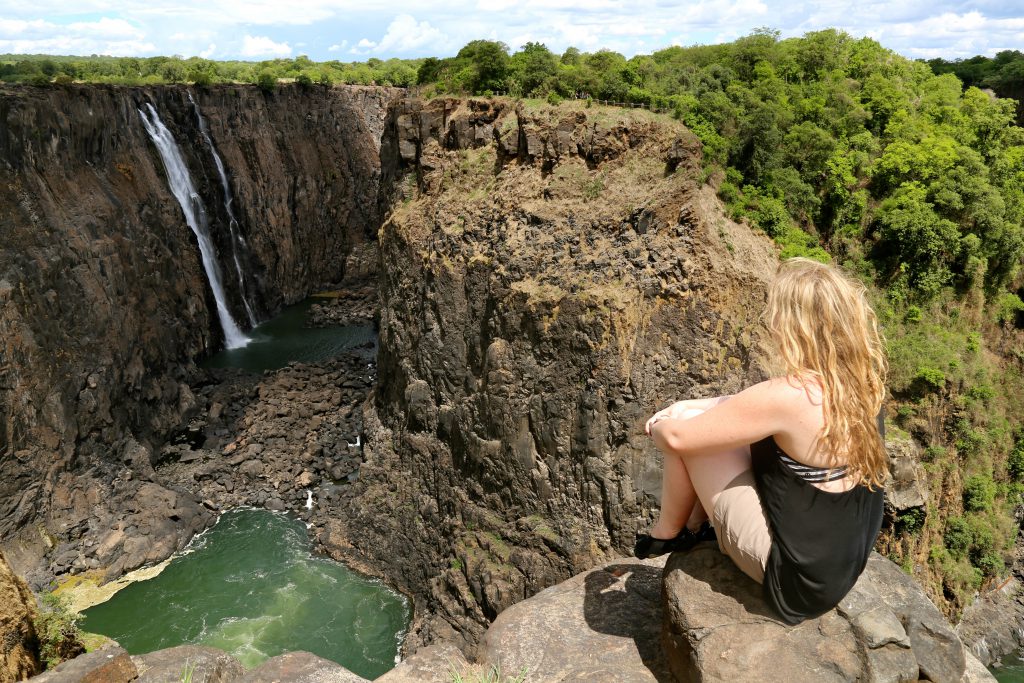 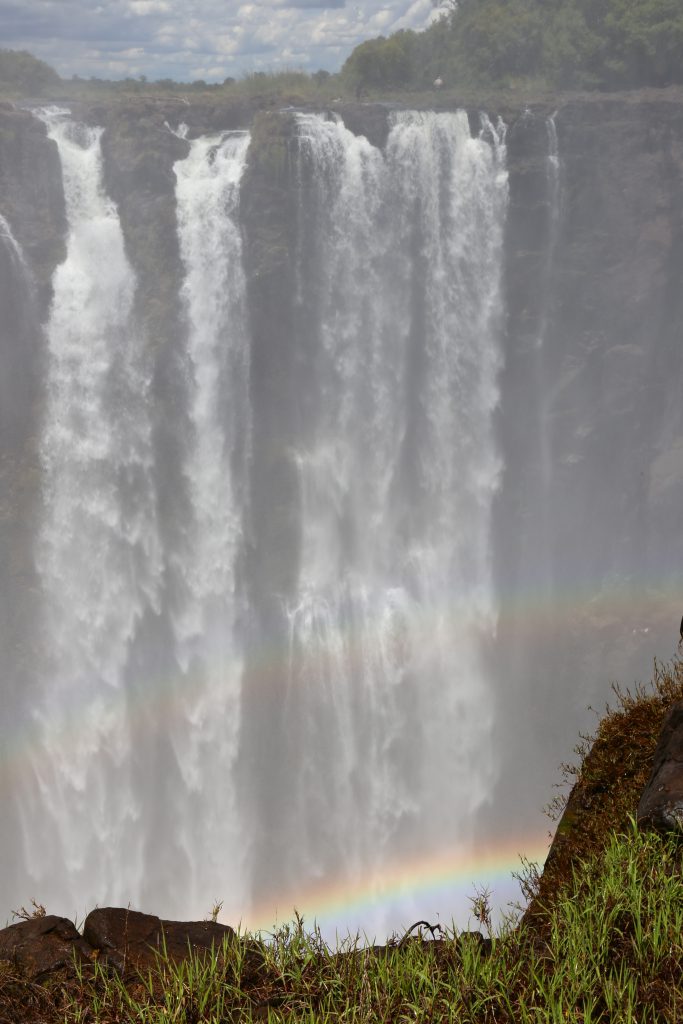 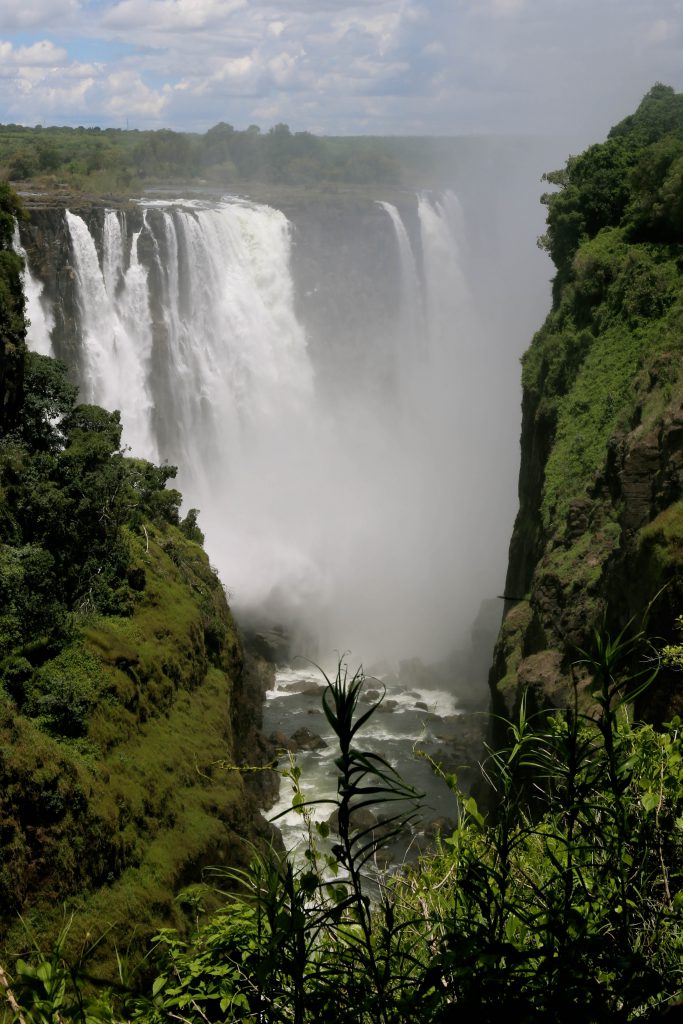 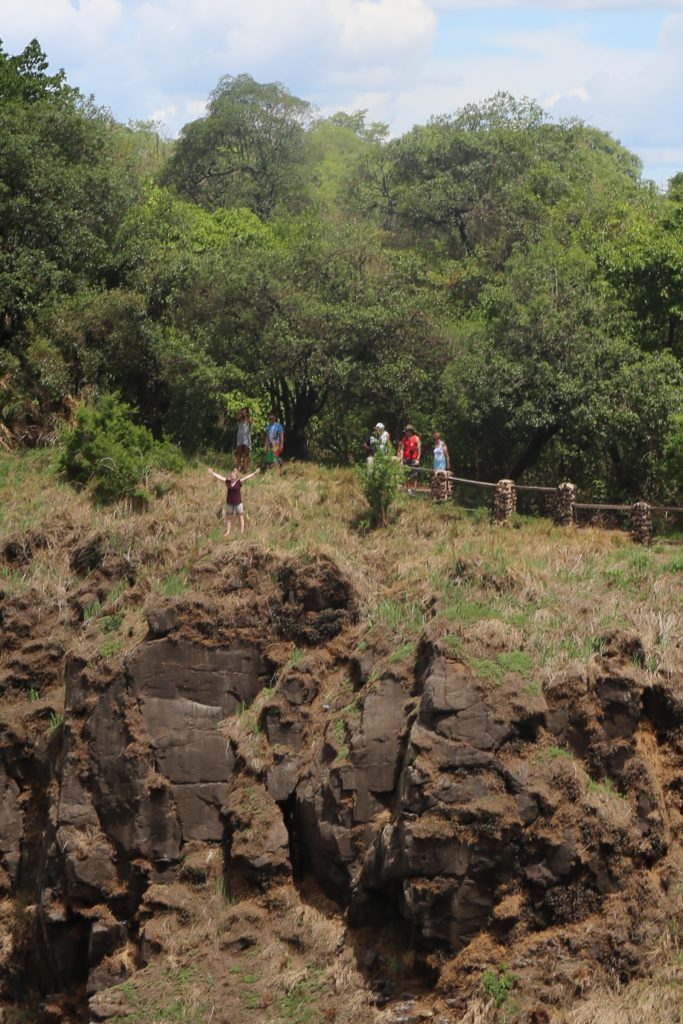 Friends on the Zambia side. Photo by Brandy Little. 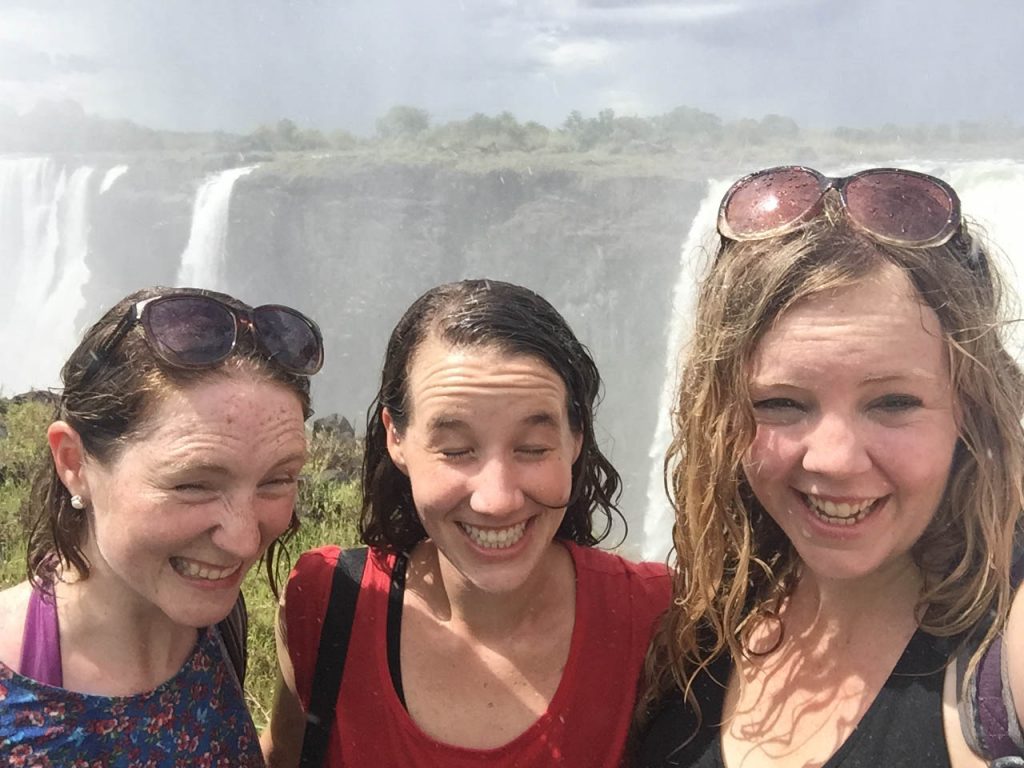 Emily, Caitlin and I at Victoria Falls

Bungee jumping wasn’t on my bucket list, but jumping a second time is.

“What would life be if we had no courage to attempt anything?” – Vincent Van Gogh