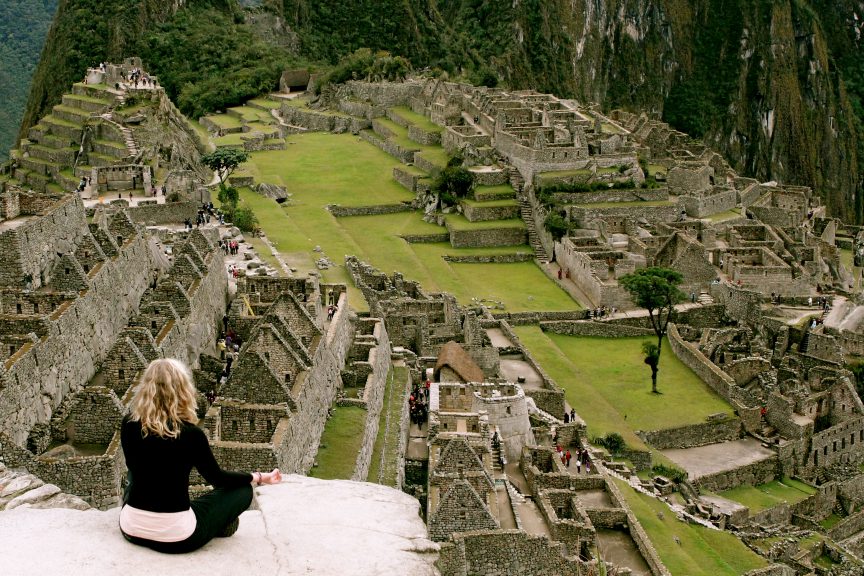 My day started waking up in Ollantaytambo in Peru, a village nestled in the Sacred Valley of the Incas. For the next four days I would trek the ancient path of the Incas about 30 miles and into altitudes reaching 13,780 ft (4,200 m) to arrive at the ancient Inca city, Machu Picchu. What I did not realize at the time, was that in those next four days, I would also meet the Pachamama and she would teach me one of my most important lessons in life. 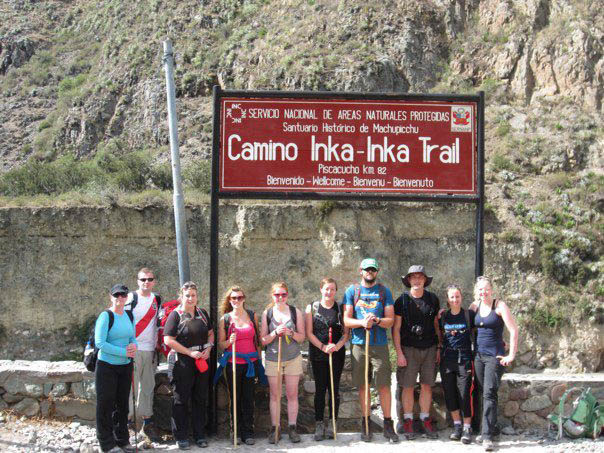 Trek group for the Inca Trail

Day one of the trek began in the thick of the Andes Mountains. It was hot, and I found myself shedding layers. Lunch came in this little community called Miskay, and I ate between a cute little puppy and baby chickens. We passed by the Patallacta Incan ruins, known as the “Village in the Heights.” It was this day I noticed the trekking guides and crew taking moments to lay out candy or coca leaves next to the path, whisper something, and then move on. Upon inquiry, I learned that they were making offerings to the Pachamama. 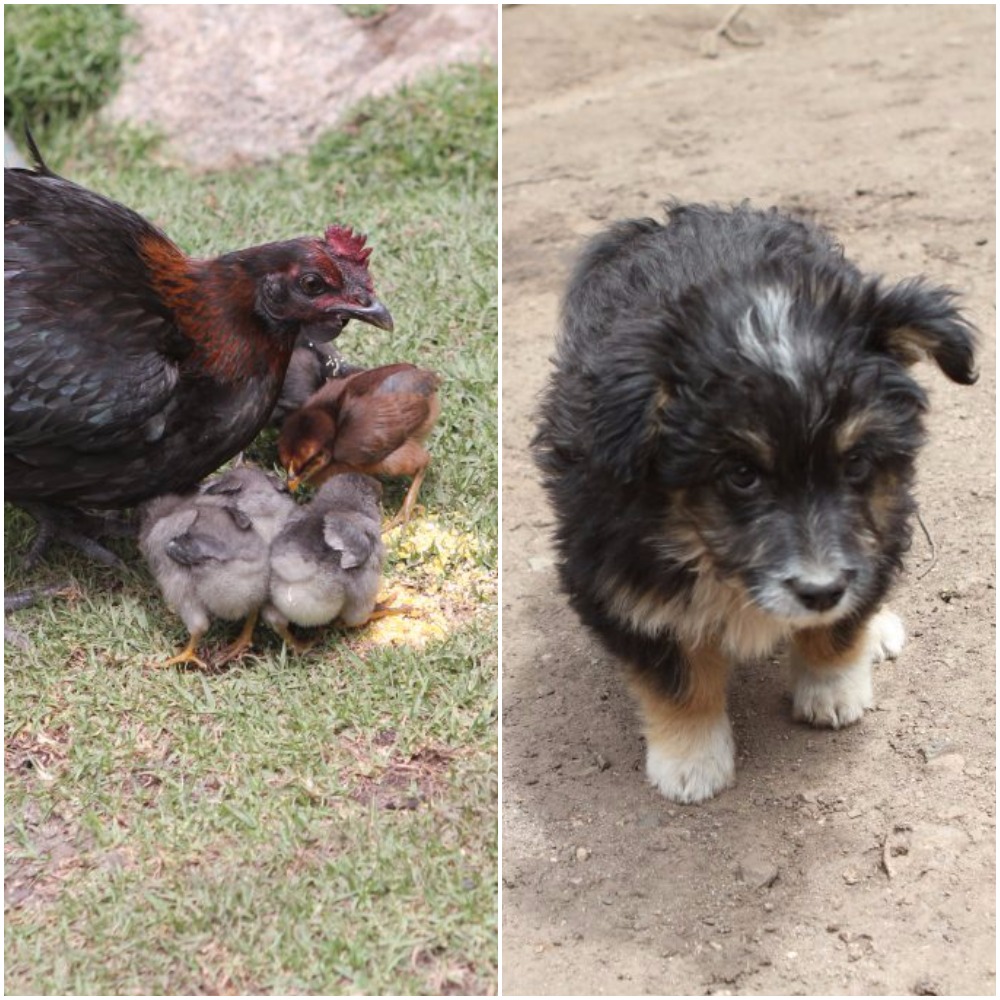 Friends on the Inca Trail. Photo by Brandy Little.

The Pachamama is the mother Earth. She is among the most revered gods and goddesses from Incan Mythology, because she presides over the Earth, and everything you have, your very survival and existence, is because of the Earth. The Earth provides your means for food, your means for shelter, and your means for water. Being surrounded by the magnificent Andes Mountains, seeing them tower over me, I felt the power of the belief in the Pachamama. There was an indescribable energy that permeated the air, and a strength of conviction of so many for so long that I could actually feel. 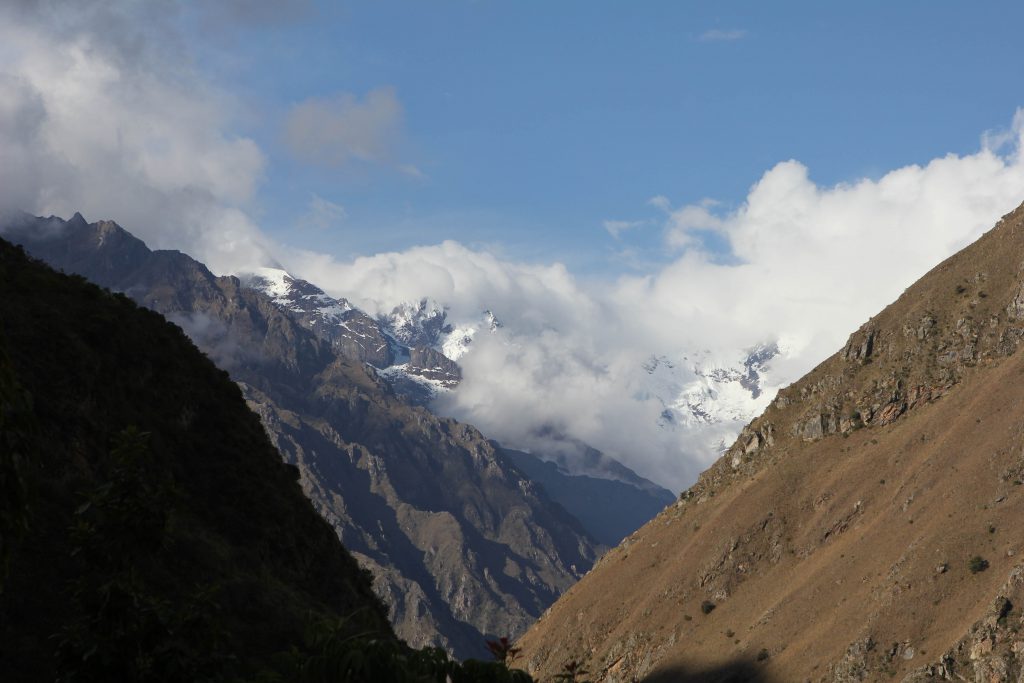 Mount Veronica in the Andes Mountains. Photo by Brandy Little.

After 7.5 miles, we made it to camp, and that’s when the fog and rainclouds rolled in. Backpacking and camping in rain is like vacuuming in a windstorm, you are going to be constantly trying to keep you and your stuff from getting messed up but you will never be able to beat it. 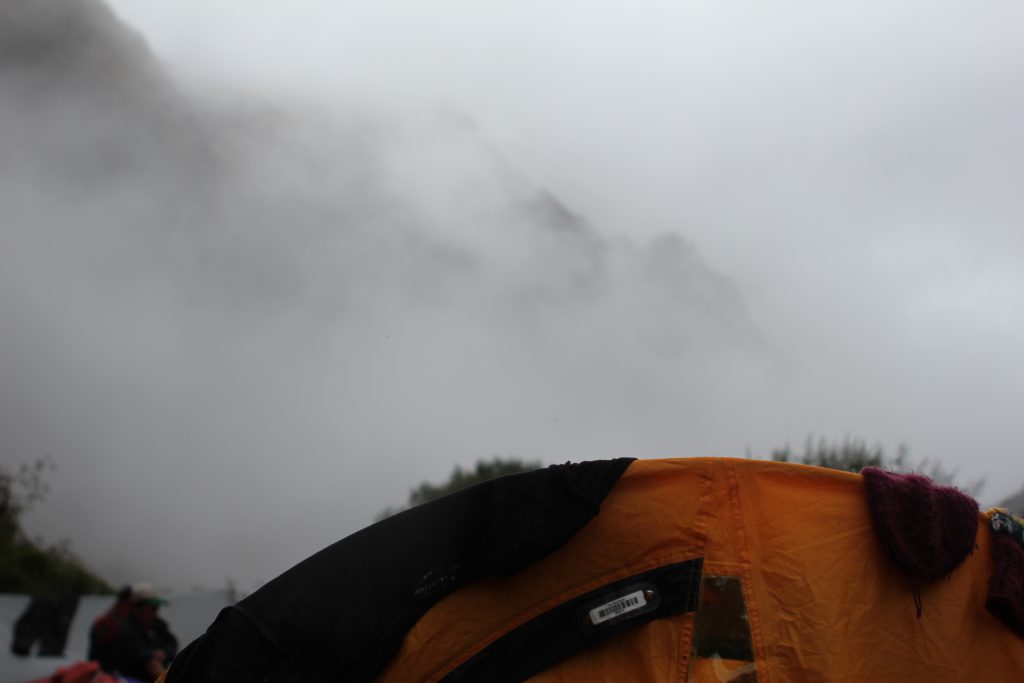 Campsite on the Inca Trail. Photo by Brandy Little.

Day two of the trek is the most rigorous. It’s 10 miles with a long steep climb to Abra de Warmiwanusca – the “Dead Woman’s Pass.” This part of the trek you enter the cloud forest; you are so high up that you actually hike through clouds. The path was on the side of a cliff, but with the rain, clouds, and fog, all I saw was a blanket of white all around me. It was dismally beautiful, but this is also when I started to worry. I came all this way and spent all my savings to get here, and, being a self-proclaimed travel photographer, I wanted that shot, that beautiful shot of Machu Picchu. I wanted that view from the sungate with Machu Picchu partially covered in clouds with the green flora and crumbling stones lit by the sun peaking over the mountains. 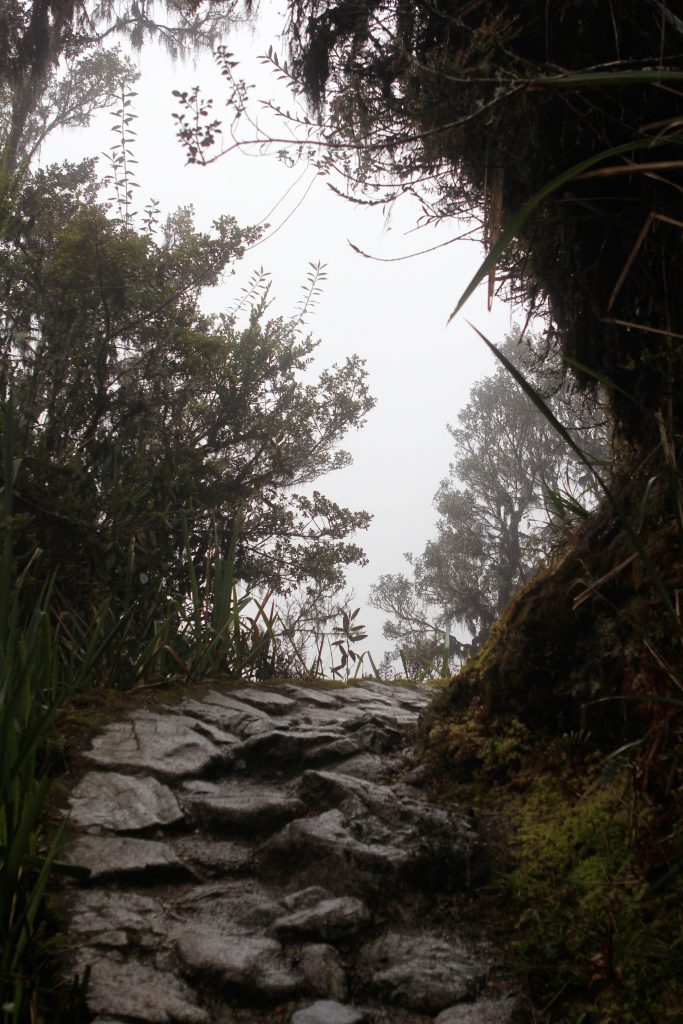 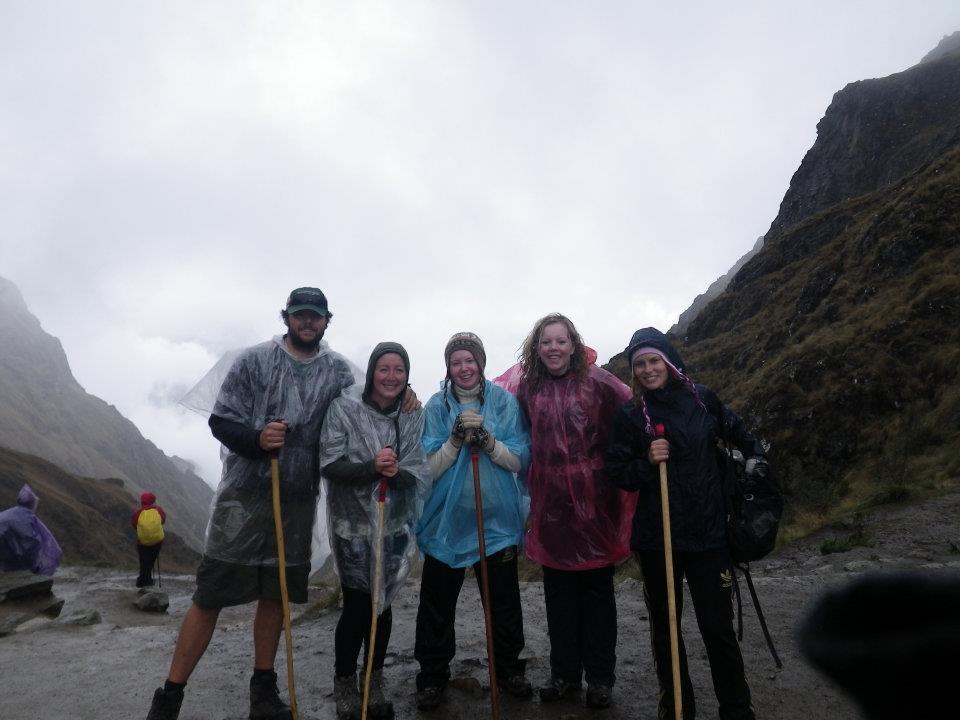 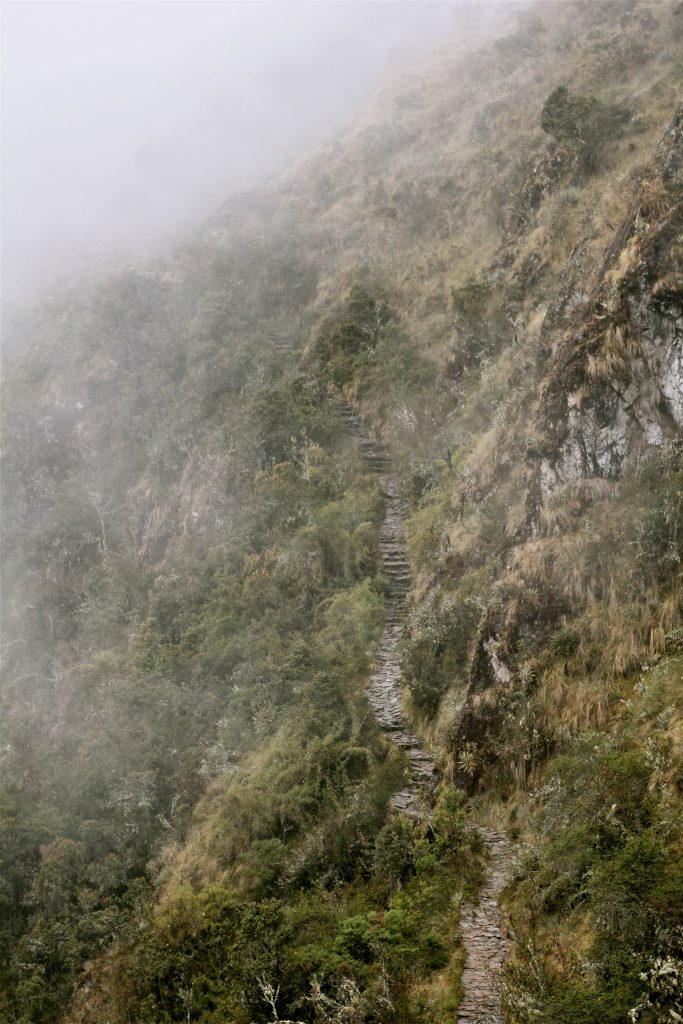 Day three of the trek continued with another rigorous 10 miles with rain and the engulfing white blanket backdrop. I actually like rain and liked hiking in it. Being from a city that only gets an average of 4 in (10 cm) of rain per year, rain is a special treat. It did introduce some challenges though. The trail is comprised mainly on uneven stone steps, and rain makes those slippery so we had to take extra care with our steps. It also made it difficult capturing any photos. 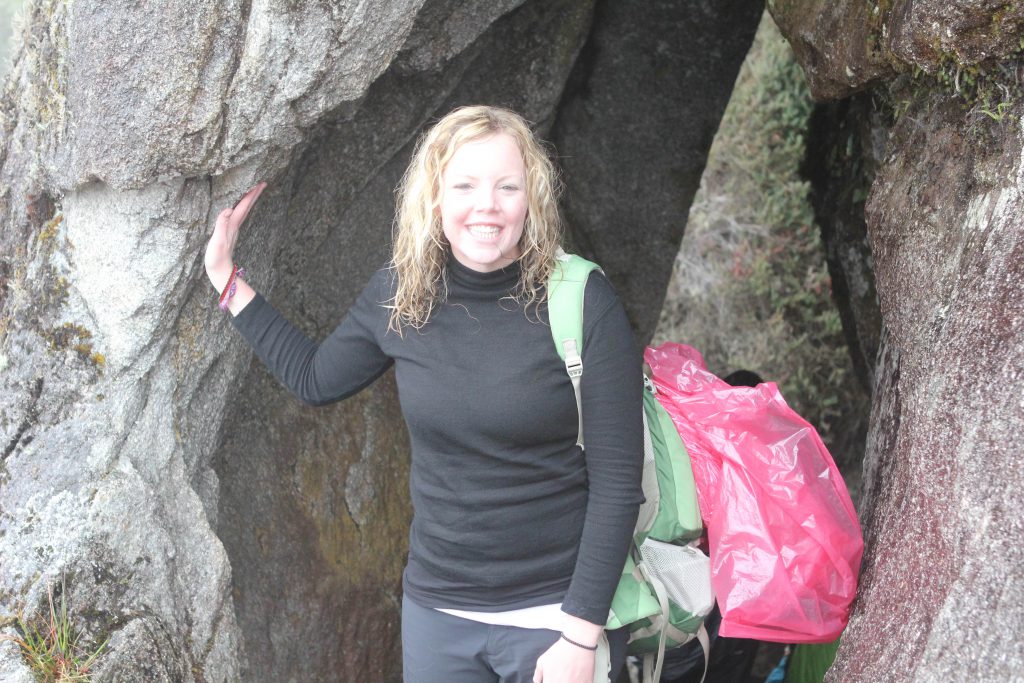 Brandy on the Inca Trail 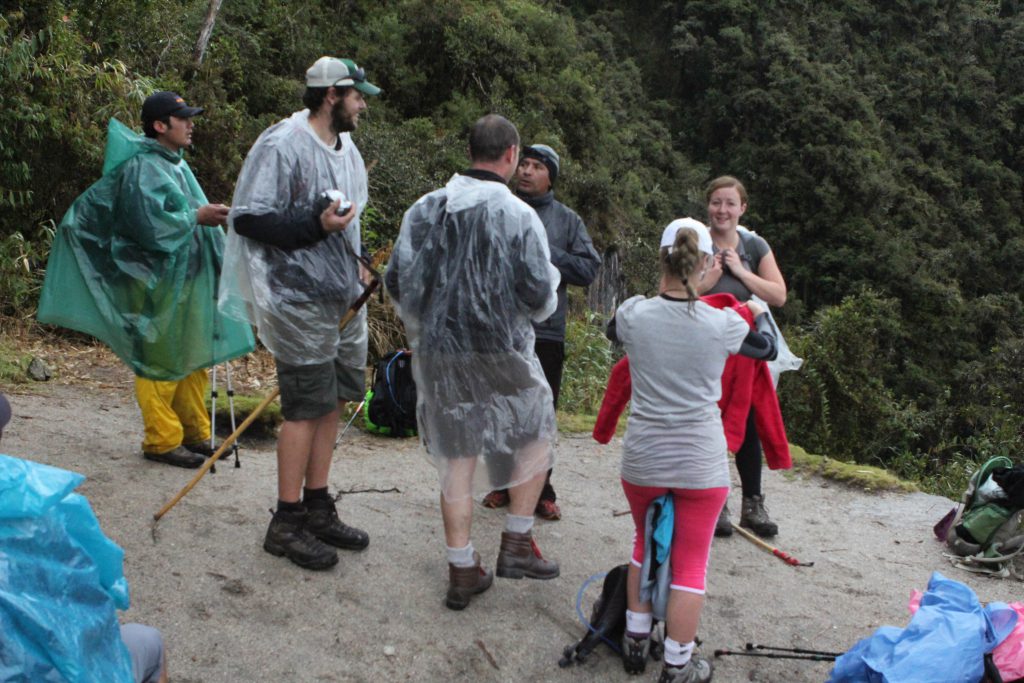 Putting on rain gear for the Inca Trail. Photo by Brandy Little.

It was during day three that I had my first encounter with the Pachamama. I realized in my hike that it was stupid being bummed about potentially not getting that view or photo opportunity. I got to be there! I got to hike this mystical and historical trail! It is a rare gift to get this opportunity, and I was being unappreciative. So, I pulled out some coca leaves from my pack and a mint, I kneeled at a rock and I told the Pachamama that I was sorry for not remembering to just be grateful to be there, regardless of the weather, and regardless of my photos and expectations, and regardless of whatever else may happen. That it was enough just to have this experience and anything more is a bonus. I told her I was thankful to her and that I would not forget to always be thankful for whatever I get to have in life. 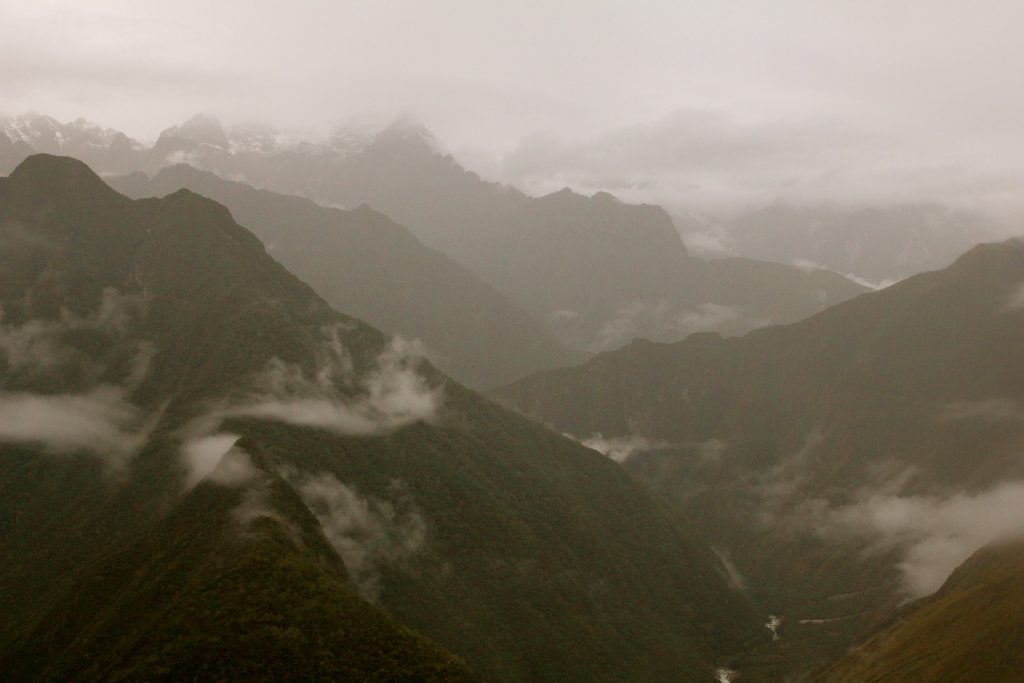 I stood up, my knees now soaking wet, and continued on. I passed through several ruins, the Sayacmarca, “Inaccessible Town.” with a steep staircase etched into the side of the mountain, the Phuyupatamarca, “The Town in the Clouds,” surrounded by terraced fields overlooking the Urumbamba Valley, and Winay Wayna, “Forever Young,” until finally I arrived at camp to sleep for a couple hours. 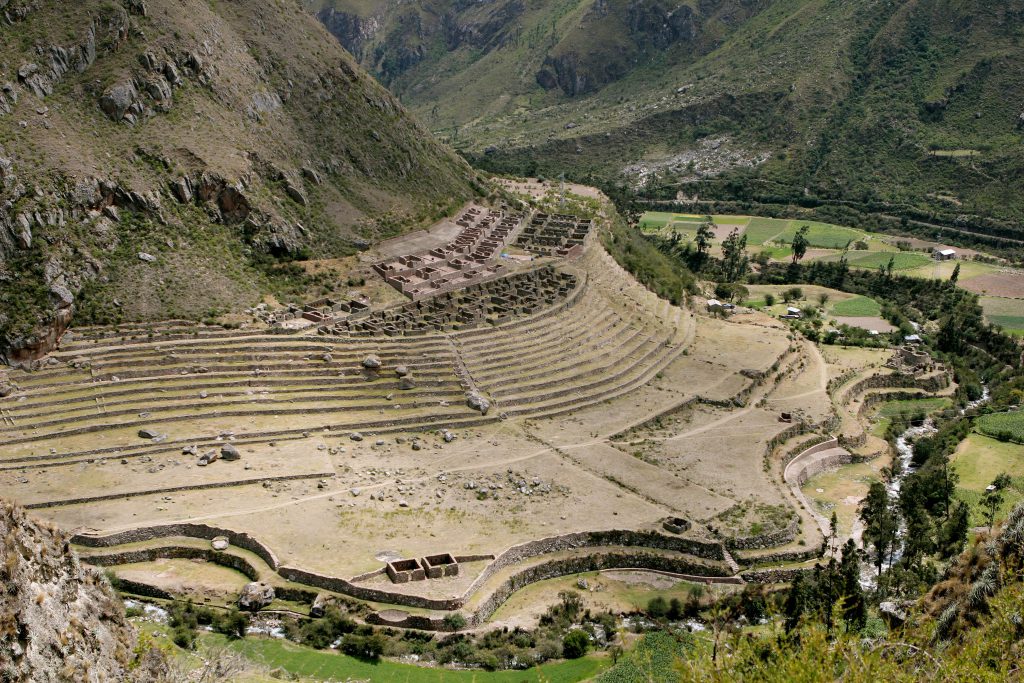 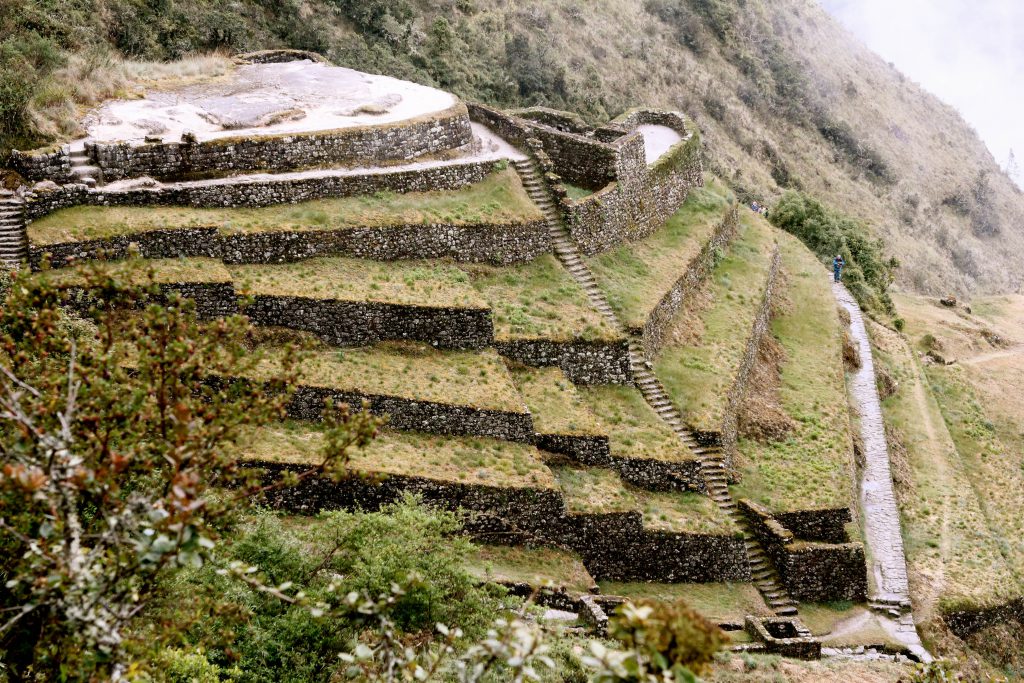 Day four started at 3:00 am and a night trek to the sungate for two miles in the rain. We left early to get ahead of the other trekkers, and waited at the base of the sungate for two hours till the sunrise. Once the sun started blossoming over the horizon, we nearly sprinted, well as much as one can sprint going nearly vertical up steps, to the sungate. The rain stopped and there it was, just as I hoped. It was breathtaking, partially covered by clouds and lit by the sun. 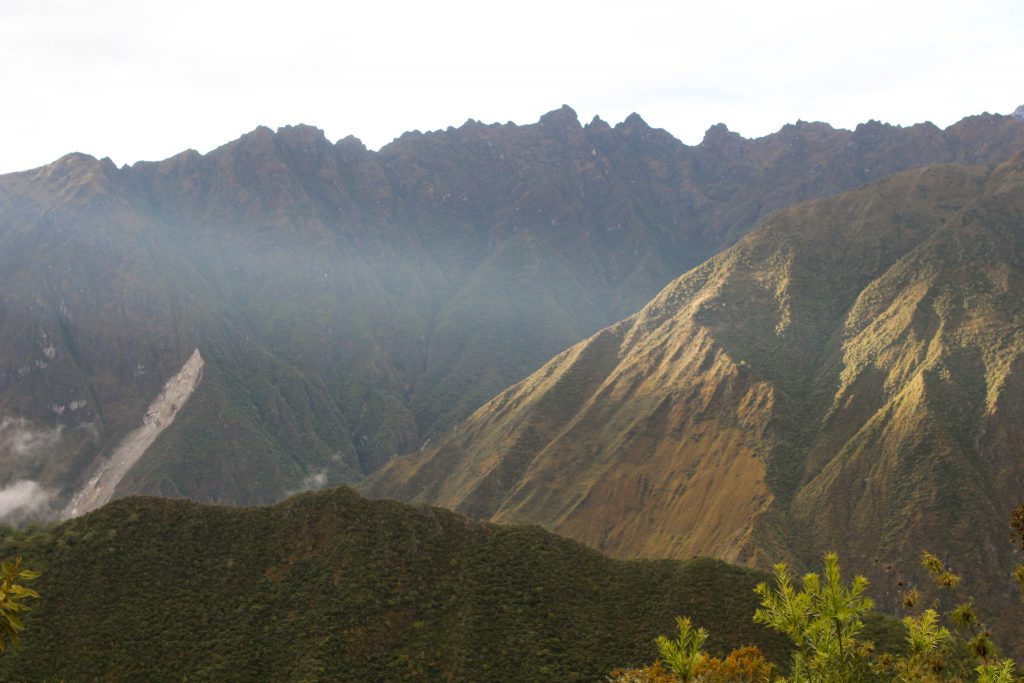 Sunlight peaking over the horizon into the Andes Mountains. Photo by Brandy Little. 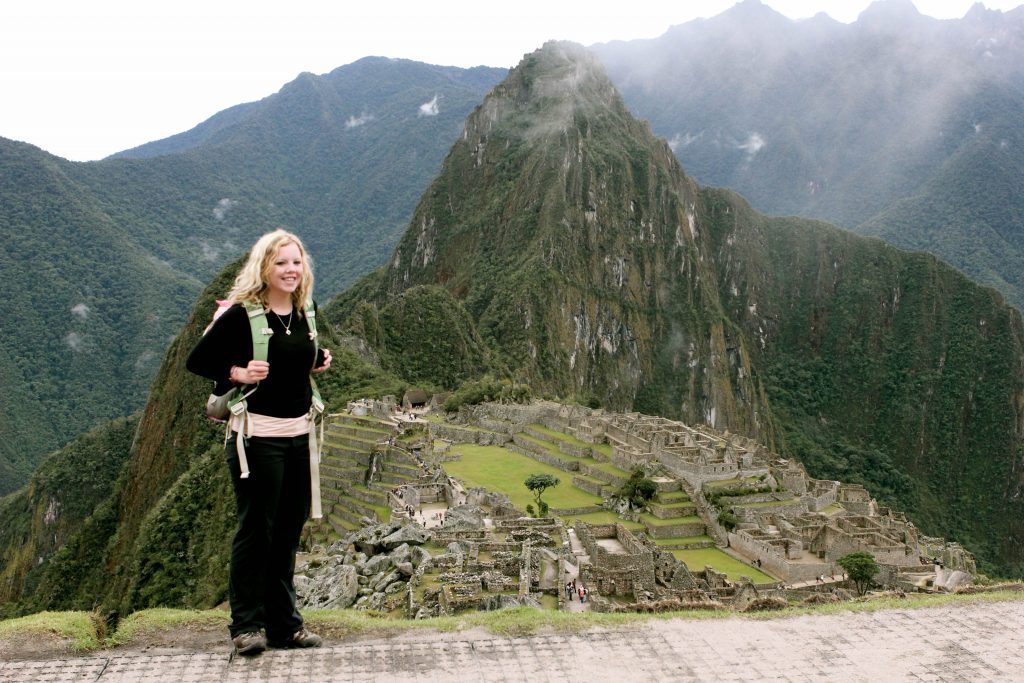 I passed by a huge stone, stopped, kneeled, pulled out some coca leaves and some mints, and said thank you to the Pachamama though I would have been thankful regardless. 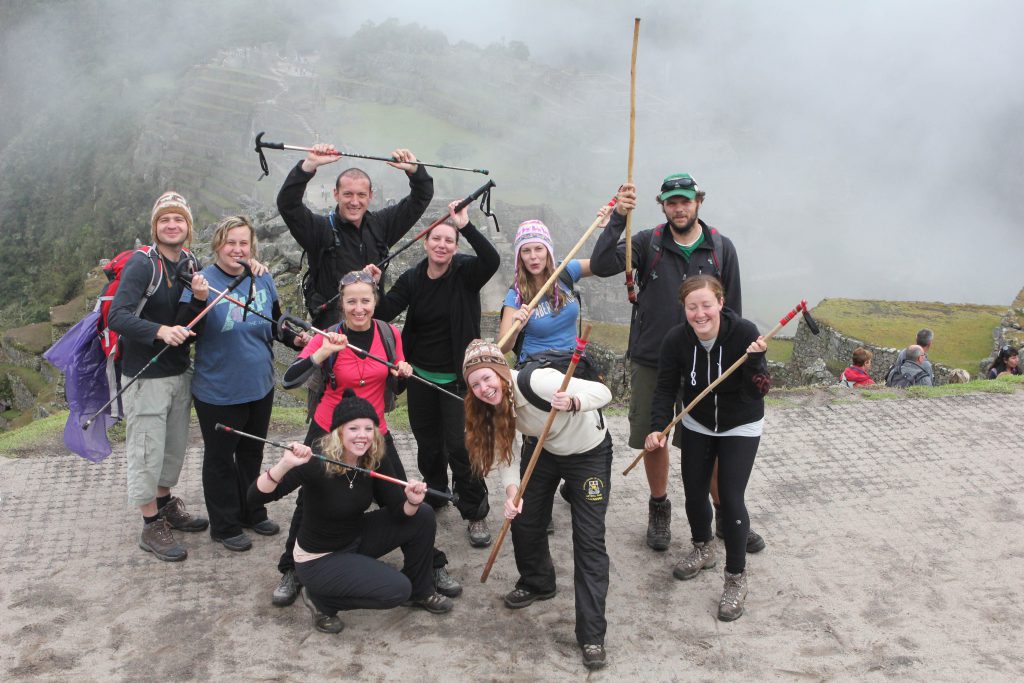 For the next three hours we hiked into the city and explored. The city is full of intricate stone work with large stones that were hauled up the cliffside by hand. I could imagine the people that lived here and moved about on a day to day basis. The origin story of the city is still largely unknown with multiple theories. Llamas grazed the terraces and one even decided to just plop down and to be honest, I almost joined him I was so exhausted. 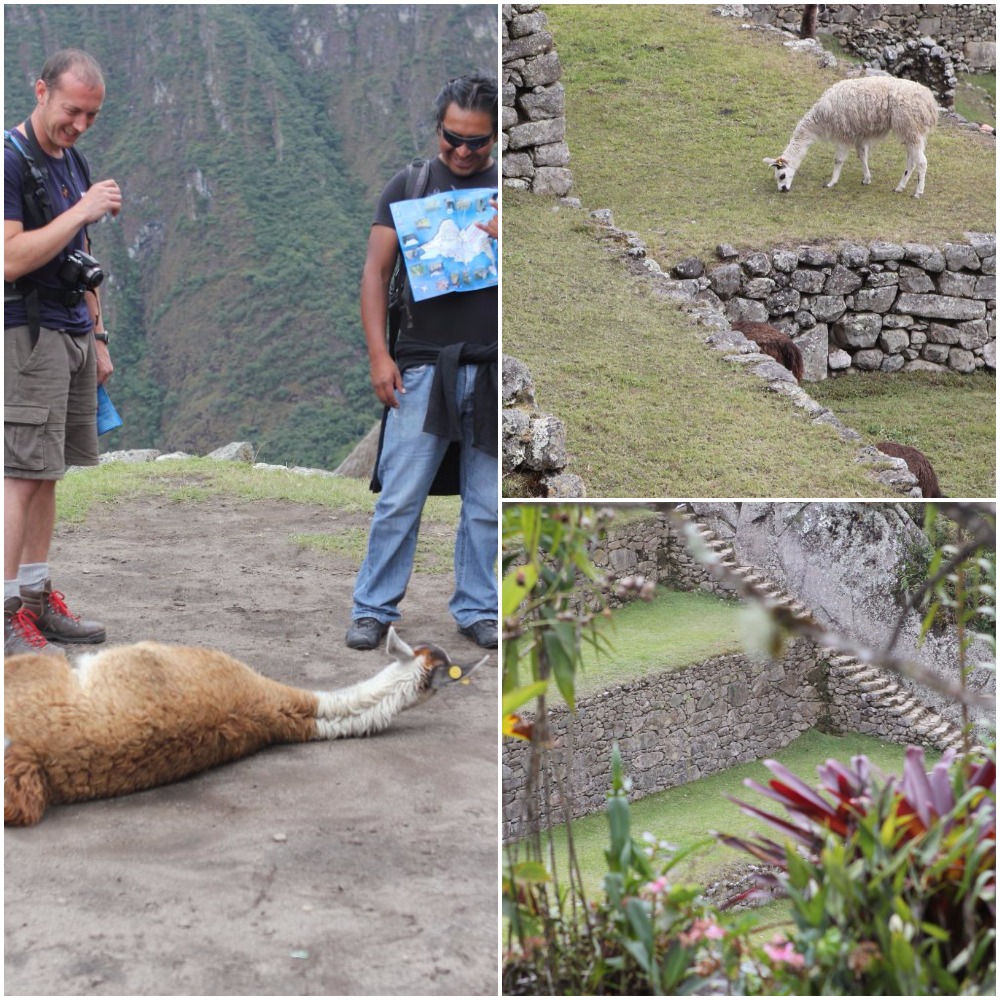 After exploring, we hopped on the bus and it immediately started to rain again. Storm clouds rushed in like a flash flood. I silently thanked the Pachamama again, not just for the small window or sunshine, but for reminding me to always be grateful. 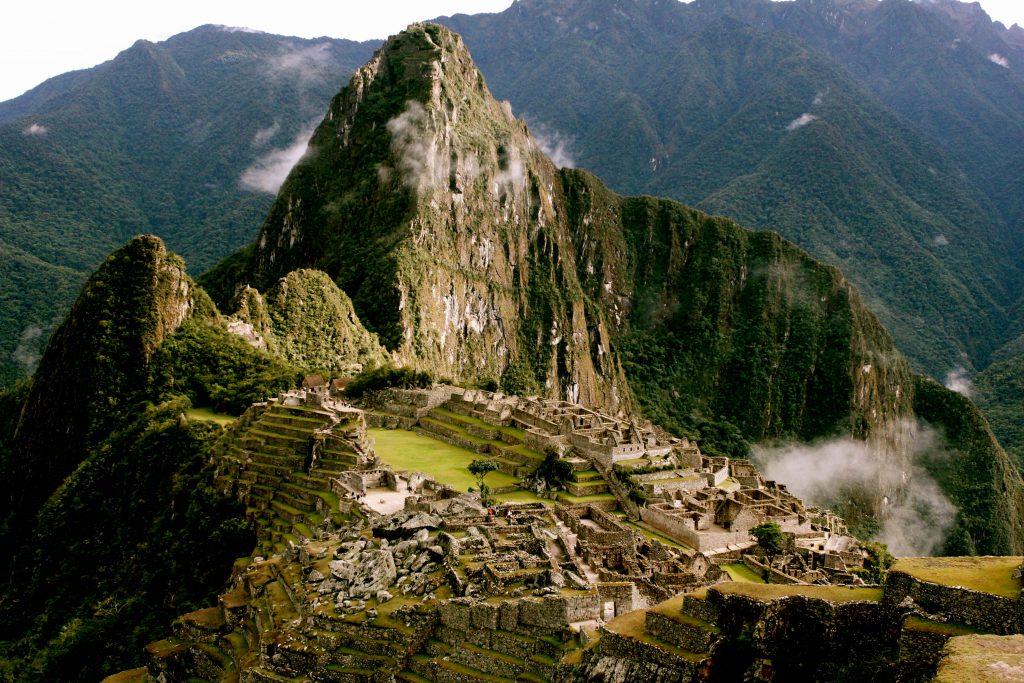 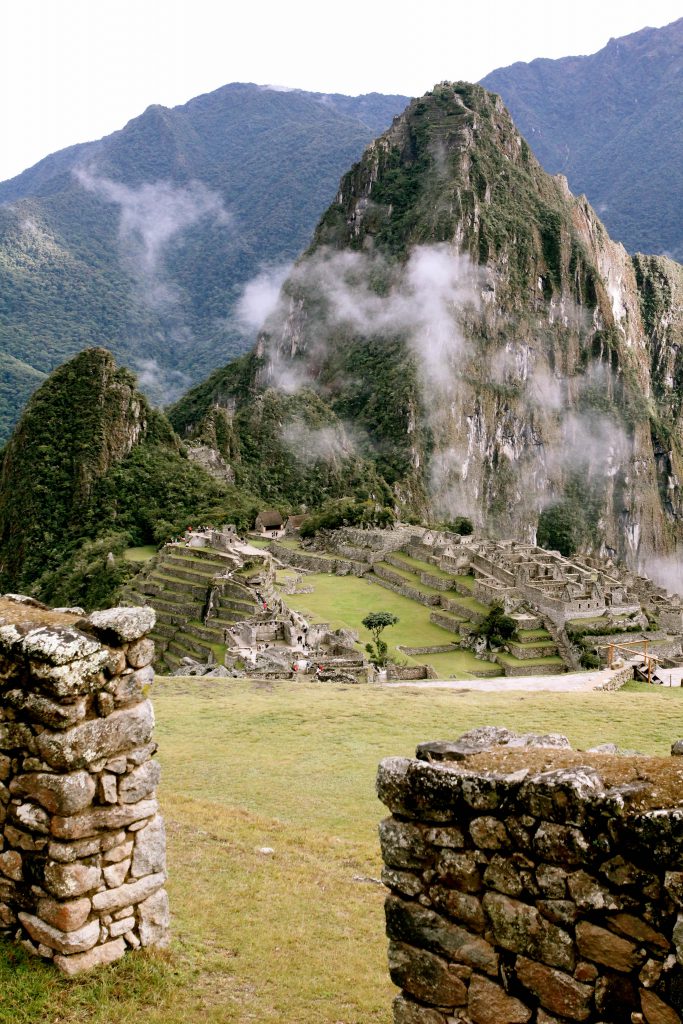 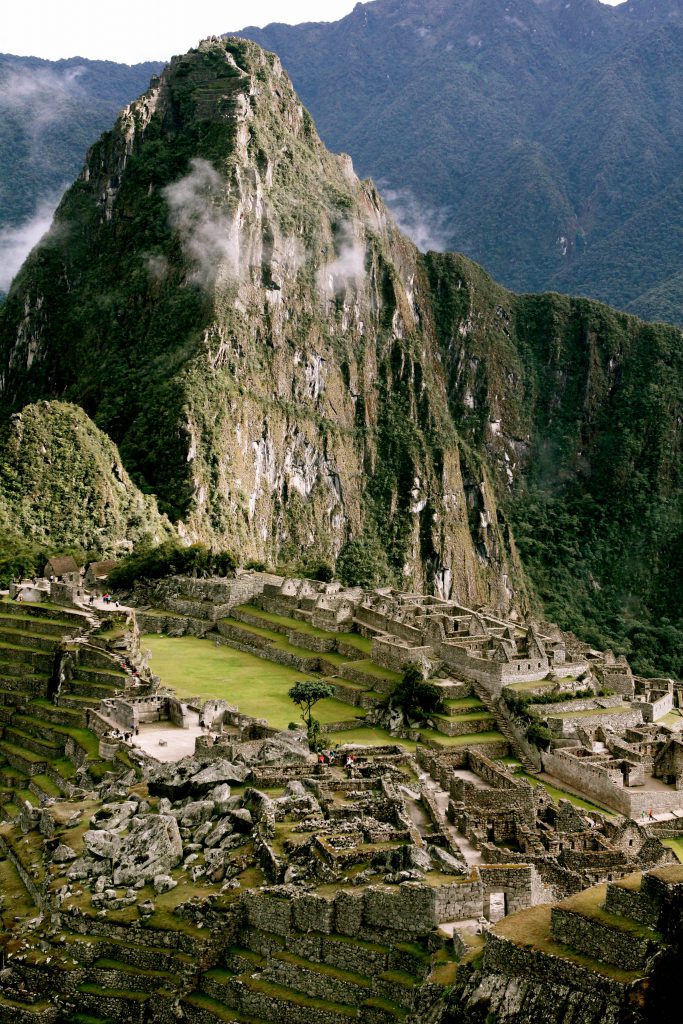 “Be Content with what you have; rejoice in the way things are. When you realize there is nothing lacking, the whole world belongs to you.” – Lao Tzu