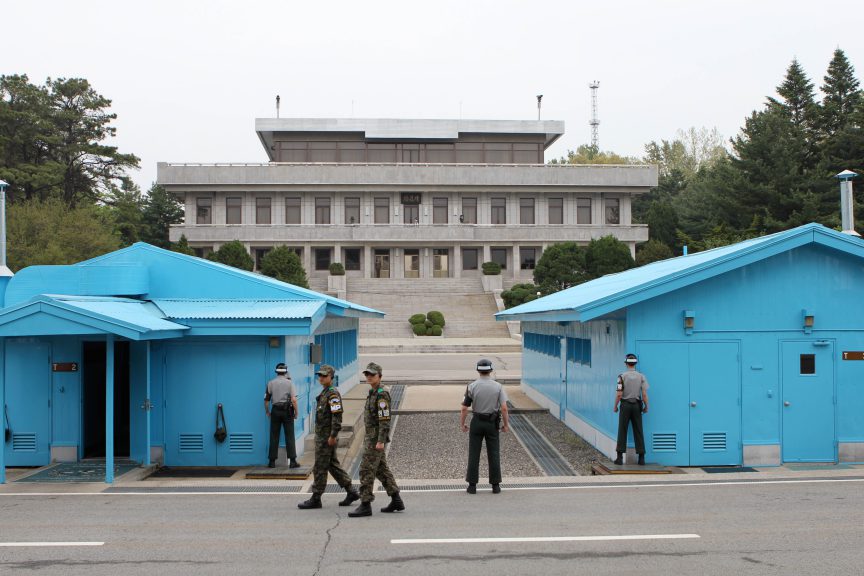 I couldn’t see them, but I knew I had several guns trained on me, ready to fire at the slightest provocation. There were probably even more than usual as it was a period of high instability and boiling tensions between North Korea and South Korea. I signed the document saying that I accept that my “visit to the Joint Security Area (JSA) at Panmunjom will entail entry into a hostile area and possibility of injury or death as a direct result of enemy action.” Then I voluntarily walked out into the direct line of fire and stood in a no man’s land, the Demilitarized Zone (DMZ) – the most heavily militarized border in the world. 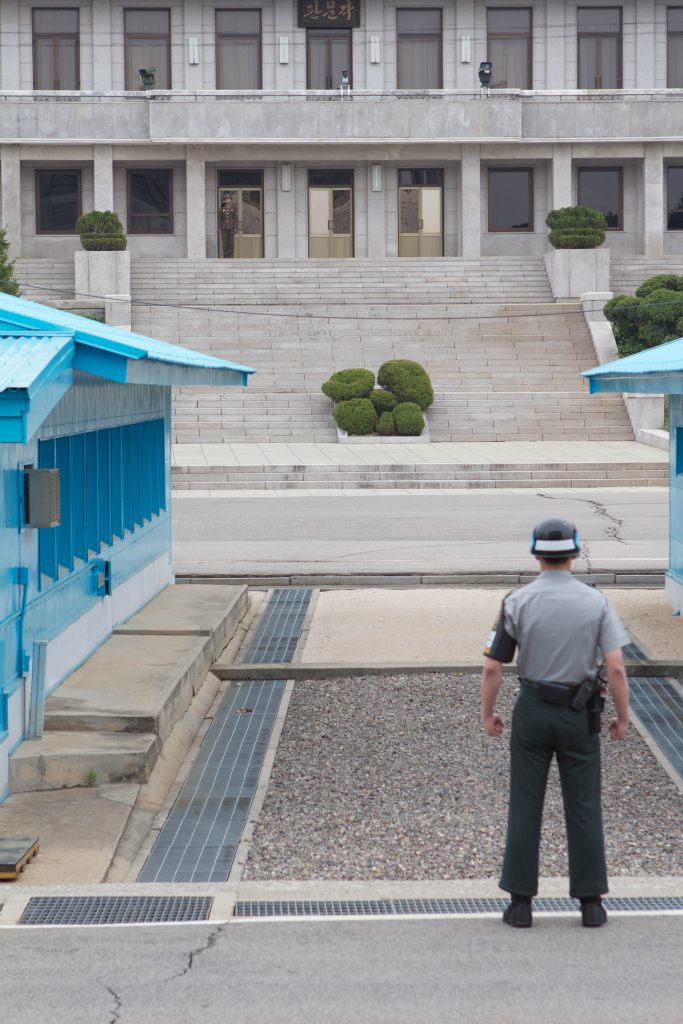 Being in that kind of situation is not what most people opt to do on their travels. It was even more daring for the friends I was with who had people that depended on them in life. So why do it? Well, it comes down to one of the main reasons I travel – to ground myself in the truths of our existence. It is easy to buy into the microcosm of our personal normal and overlook everything else, causing us to forget what humanity truly encompasses, to segregate us from each other, and to never know what is truly important. Or maybe being born in Vegas breeds risk loving attributes, or I just have an innate high level of curiosity. Whatever it is, I went.

The DMZ was established in 1953 and effectively serves as a border between North and South Korea following the 38th Parallel. It stretches 160 miles (250 kilometers), bisecting the peninsula from the Yellow Sea to the Sea of Japan. It’s 2.5 miles (4 kilometers) wide and is filled with landmines, barbed wire, and electric fences. Soldiers line both sides, armed and ready for battle with past skirmishes leaving both with military and civilian casualties. Several tunnels built by North Korea for future invasion intertwine beneath it. It is a place where, at great peril, defectors from North Korea attempt to cross seeking asylum likely passing missionaries, spies, or aid workers trying to sneak in driven by their respective pursuits. 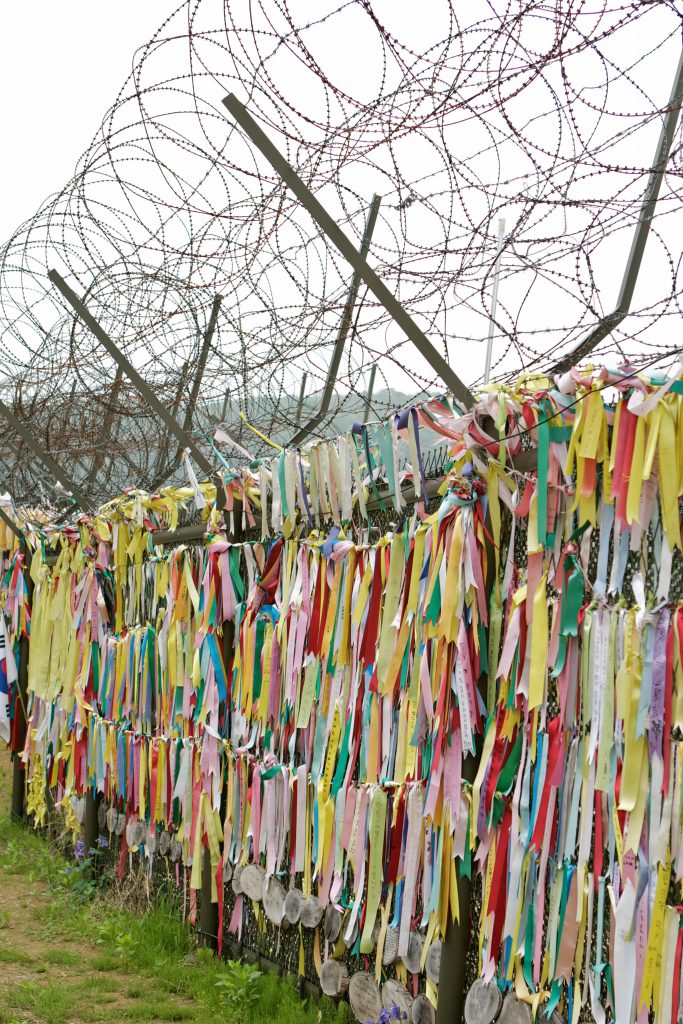 The divide in Korea happened at the end of World War II. The area now called North Korea (formally known as the Democratic People’s Republic of Korea) was occupied by the Soviet Union and the area now called South Korea (formally called the Republic of Korea) was occupied by the United States. The occupation lasted through the Cold War, and left each area with strong ideological differences that eventually led to the Korean War.

Even though the war technically ended three years later with the Korean Armistice agreement, a final peace agreement was never made. And so, the two countries exist in a ceasefire, still at war, and ready to engage. Just weeks before my visit, North Korea renounced any peace pact’s, closed the main Panmunjom border crossing, severed communications, advised the United Kingdom, Russia and Sweden to evacuate their embassies, and warned all foreign companies and tourists to evacuate threatening a pre-emptive nuclear strike. 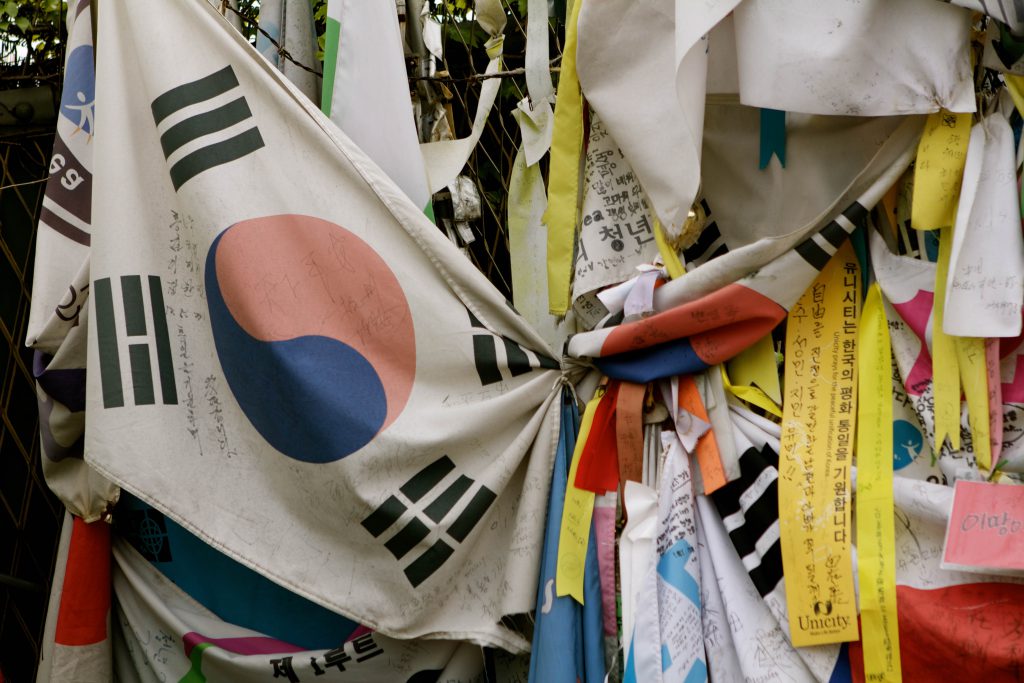 This type of bellicose rhetoric from North Korea towards its perceived enemies is commonplace though, and because it is one of the most secret societies in the world, it’s hard to gauge their seriousness. Even so, potential targets take precautions, like bolstering up missile defense systems. And, in the meantime until a spark ignites a war, North Korea embarks on bombastic trivial acts of bravado, like the Flagpole War, where Daeseong-Dong, a South Korean town in the DMZ put up a flag, and the North Korean town in the DMZ, Kijong-dong, responded by also putting up a flag but higher, at 525 feet (160 meters), and heavier, at 595 pounds (270 kilograms). Further, Kijong-dong actually isn’t even a town, but an illusion of one. It boasts concrete shell buildings with blue roofs and white walls with no windows or interior rooms. A couple lights come on and an occasional caretaker is featured to make it appear populated. 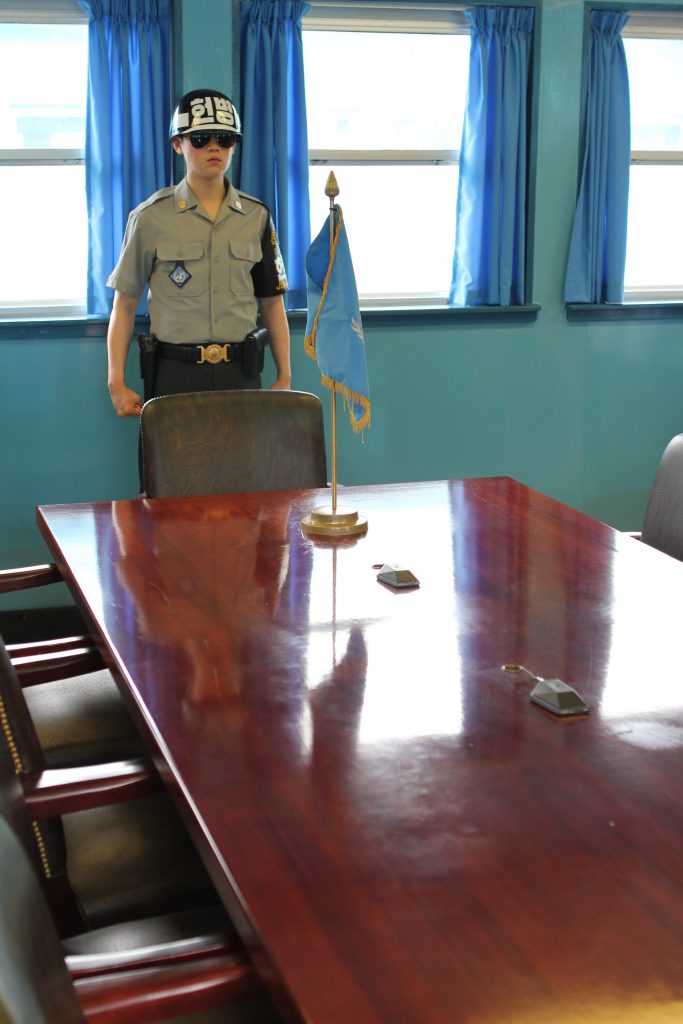 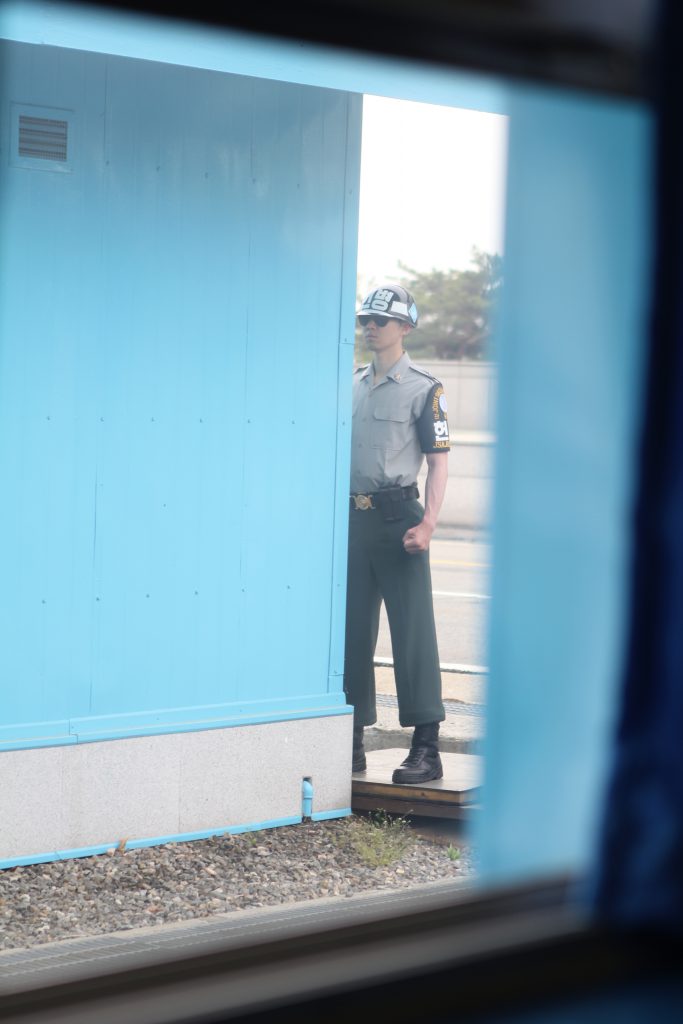 Within the DMZ I was at the Joint Security Area, where there is a group of sky blue buildings used for negotiations. These buildings are sandwiched by Panum Hall, the North Korean building, and the Freedom House, the South Korean building. Both sides place guards between the meeting houses. All the South Korean guards have a black belt in taekwondo and firmly hold an intimidating stance with clenched fists and sunglasses. Inside one of the buildings there is a long polished wooden table with cushioned brown chairs. Half of the room is in South Korea and the other half is in North, so technically, I can say I have been in North Korea. 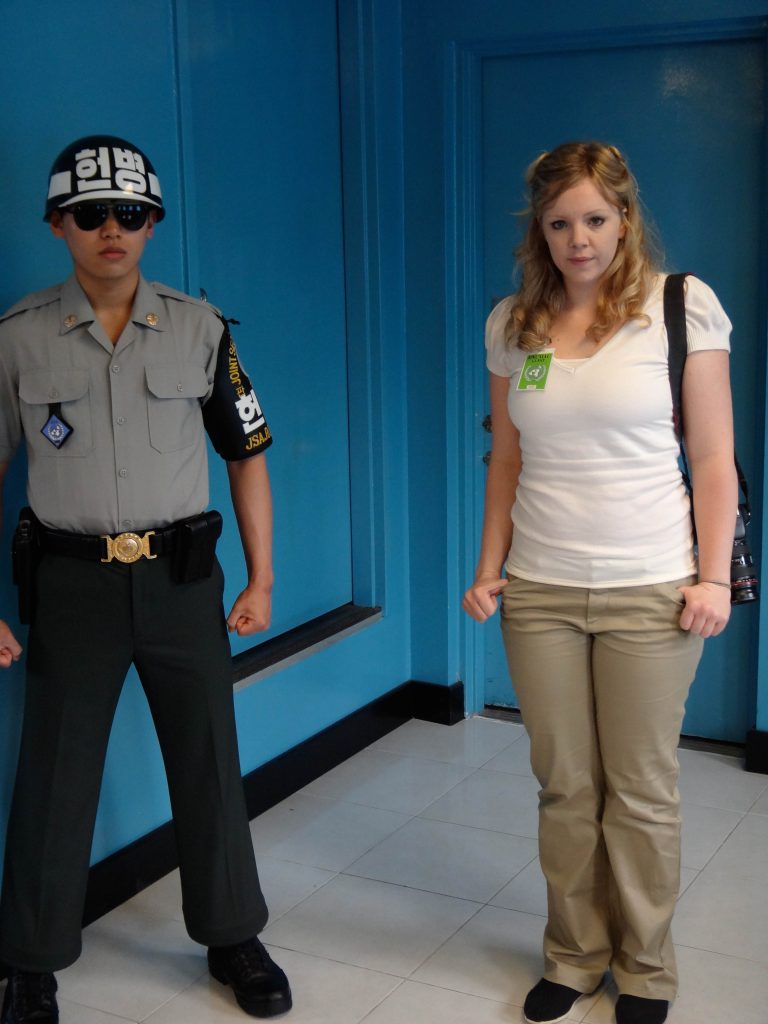 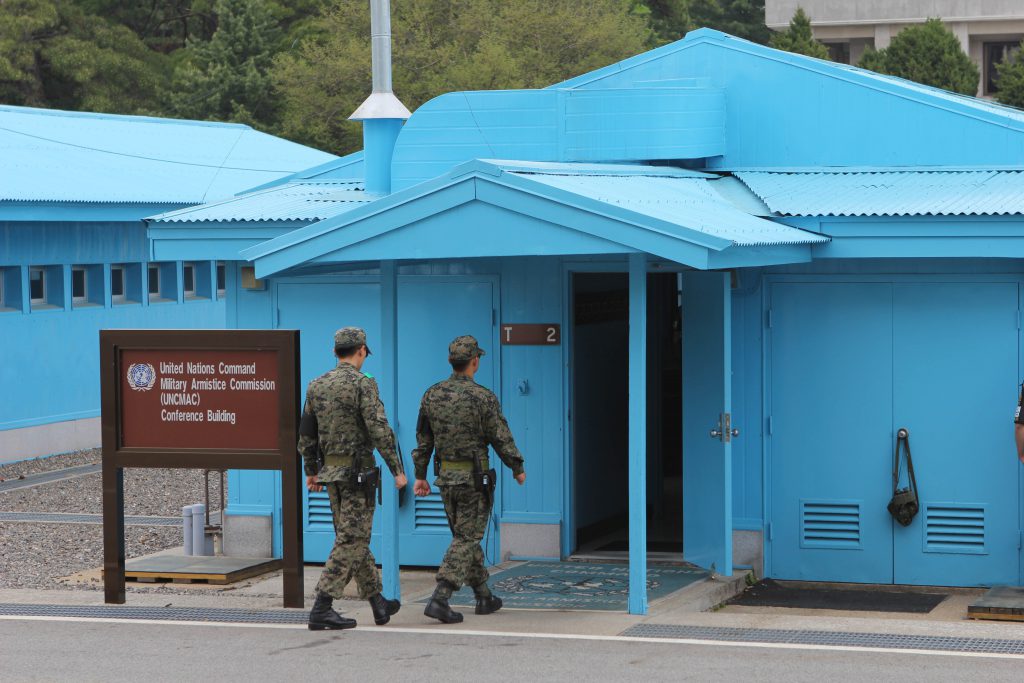 This may have been the relatively more safe way for me to glimpse North Korea, because flying in introduces its own set of challenges. There are reports of systematic human rights abuses, with rampant torture, routine execution, brimming detention facilities, depraved labor camps, and severely restricted political and economic freedoms. Economic hardship and famines are said to have resulted in millions of casualties. Foreigners are frequently imprisoned without substantiated cause. Radio and television sets are pre-tuned to government stations that steadily stream western propaganda and promote a cult-like idolization of the country and leaders. Because they use propaganda as a means to control their people, I was required to follow a strict dress code and refrain from waving and gesturing, to avoid providing any fodder for their propaganda uses. 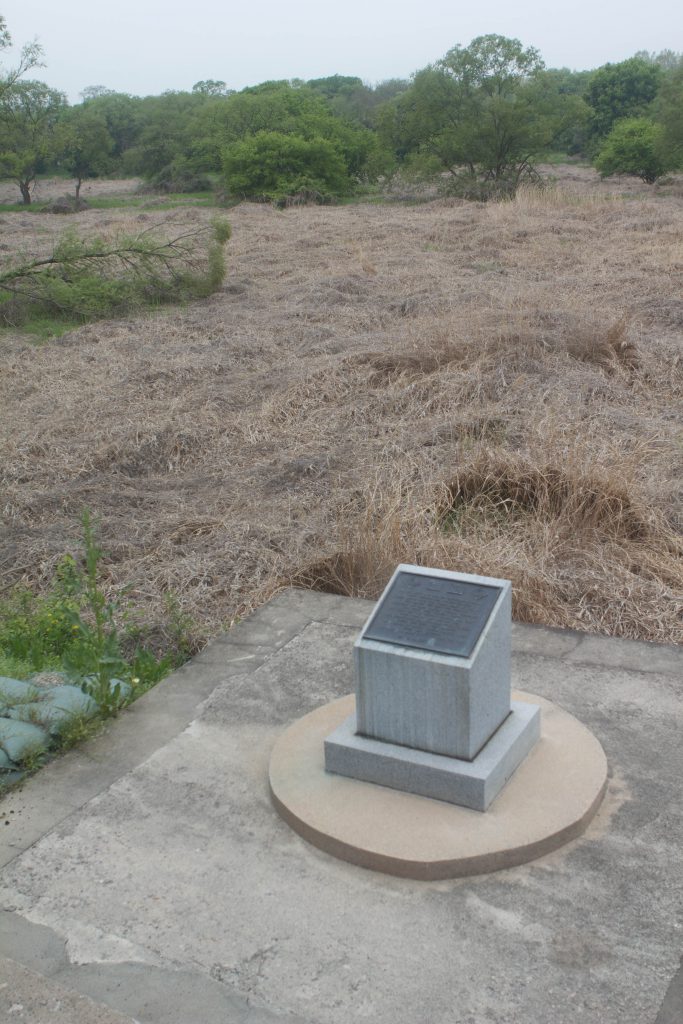 Memorial for the Axe Murder Incident photo by Brandy Little 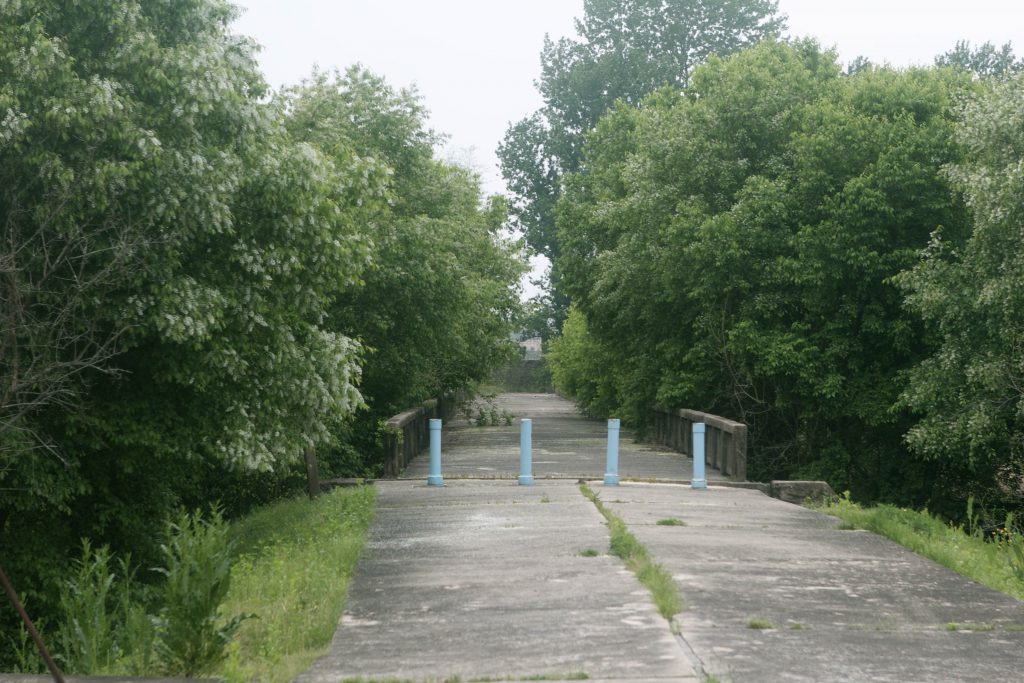 Bridge of No Return photo by Brandy Little

I knew most the history going in, and learned the stories of the Flagpole Wars and the Axe Murder incident while there, but it wasn’t till I passed the Bridge of No Return and ended the tour at Imjingak park, that I received the grounding I was looking for. Imjingak park was built to console those from both sides who are unable to return to their hometowns, friends, and families. That’s a part of war we forget. It’s so easy to separate ourselves and define an “us” and “them,” and treat the parts – the humans, as the whole – the ideology or threat. War is brought on by thinking “us” versus “them,” and this deludes us from seeing all the victims and travesties of war and ascribes a sort of righteousness or superiority to a side. I never want to forget all the ways war hurts, and I want to make the flag for humanity the highest and the heaviest. Take that Flagpole War. 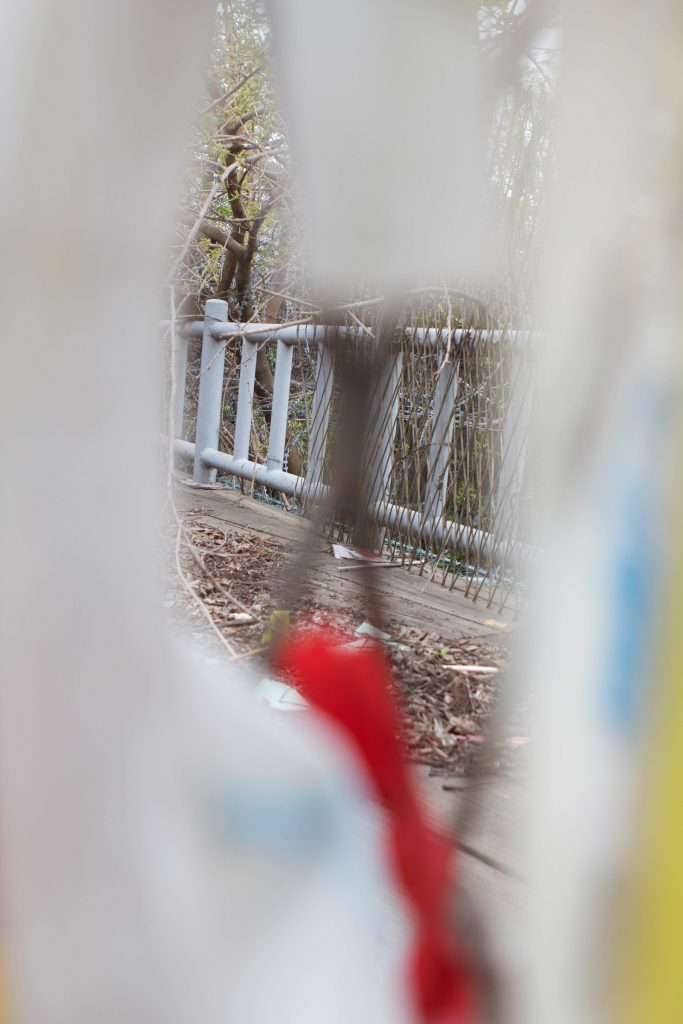