Warning: "continue" targeting switch is equivalent to "break". Did you mean to use "continue 2"? in /home/ae5rdc0mr9y1/domains/travelingoutloud.com/html/wp-content/plugins/revslider/includes/operations.class.php on line 2722

Warning: "continue" targeting switch is equivalent to "break". Did you mean to use "continue 2"? in /home/ae5rdc0mr9y1/domains/travelingoutloud.com/html/wp-content/plugins/revslider/includes/operations.class.php on line 2726

Warning: "continue" targeting switch is equivalent to "break". Did you mean to use "continue 2"? in /home/ae5rdc0mr9y1/domains/travelingoutloud.com/html/wp-content/plugins/revslider/includes/output.class.php on line 3624
 Masai Conversations | Traveling Out Loud 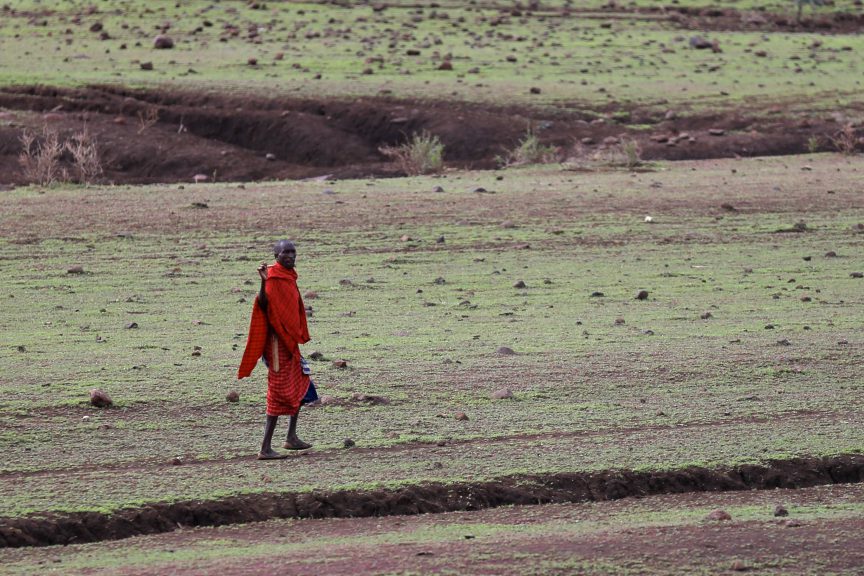 
On the Island of Zanzibar, in a local tavern, I found myself playing pool with a young Maasai warrior. I would later learn that our cultural differences were incredibly vast, from how we grew up, from what we experienced, from what we know, and, more strikingly, from what we don’t know. Most of all, I would learn that none of that mattered, because despite all these differences, we were very much the same, human. Humans that are trying to cope with sorrow, trying to find happiness, trying to find connection, and trying to navigate through a world that doesn’t take us into account.

Waiting his turn, he stood holding the pool stick wearing just one red cloth draped around his lean body. Part of his chest was uncovered exposing an elaborate hand-made jewelry chest piece made of bones and beads. When he leaned over to take a shot, his machete and knife strapped around his waist clacked against the side of the table. The only thing we had in common of our dress was the sandals on our feet covered by the white sand we were sinking into. 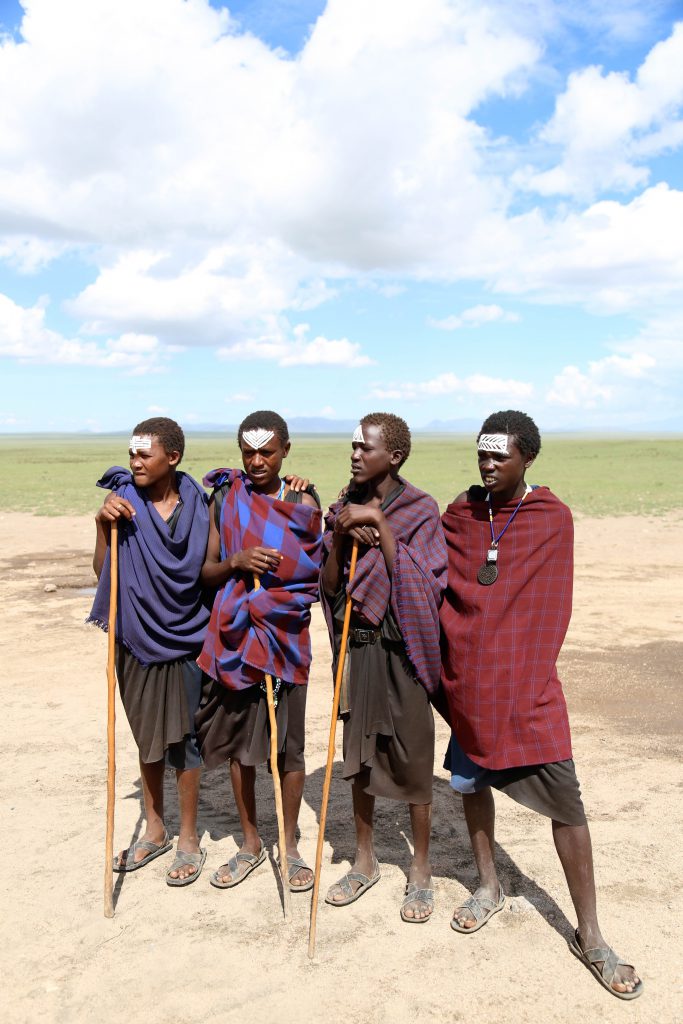 Standing under a sky lit by stars, we started talking. Like me, he was very far from home. His tribe resides in Northern Tanzania by the Serengeti and Lake Victoria, more than a day journey of rough travel. He is in Zanzibar to sell jewelry made by his people for money for his tribe, and to learn English. He is the only one in his tribe who knows English. 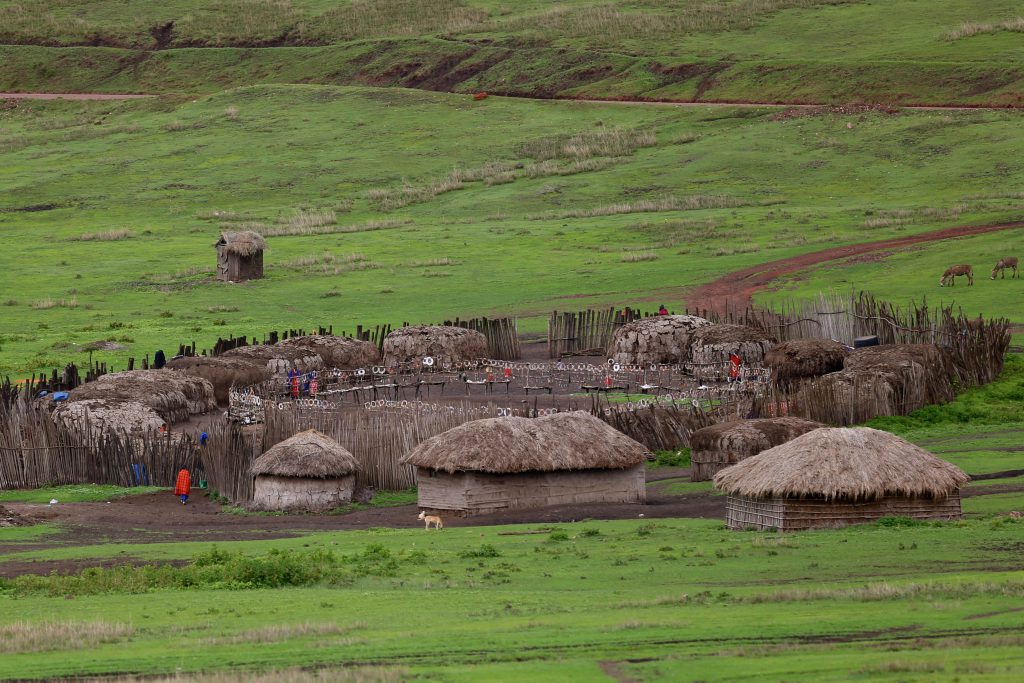 A Masai Village nestled in a hill in the Serengeti National Park. Photo by Brandy Little.

He made enough money to buy a cell phone for himself, and his mother and brother. It’s a challenge though because his tribe is deep in the wilderness with no electricity or service. He did get to talk to them that morning though, and, despite the darkness, I could see tears well in his eyes as he choked out, “I miss them. I get so lonely.” I thought, “Me to. I haven’t talked to my mom in a month.” Actually, I hadn’t had any cell phone or email access in a month.

“I am 30 years old.” Not that 30 is old, but he looked much younger than that, which I expressed, and he said, “It’s because I drink the blood of a cow.” He said it so matter-of-factly and like it’s common knowledge that inside I was like, “Oh, right, of course, why didn’t I think of that.” Other than raw cow milk, they drink raw cow’s blood, sometimes with a splash of honey. In fact, that’s their go to for medicine, “Cow’s blood gives me strength, gives me energy. If I am feeling tired or do not feel good, I drink cow’s blood.” They also eat only cow, usually raw. The cow is everything, the center to their livelihood and sustenance. 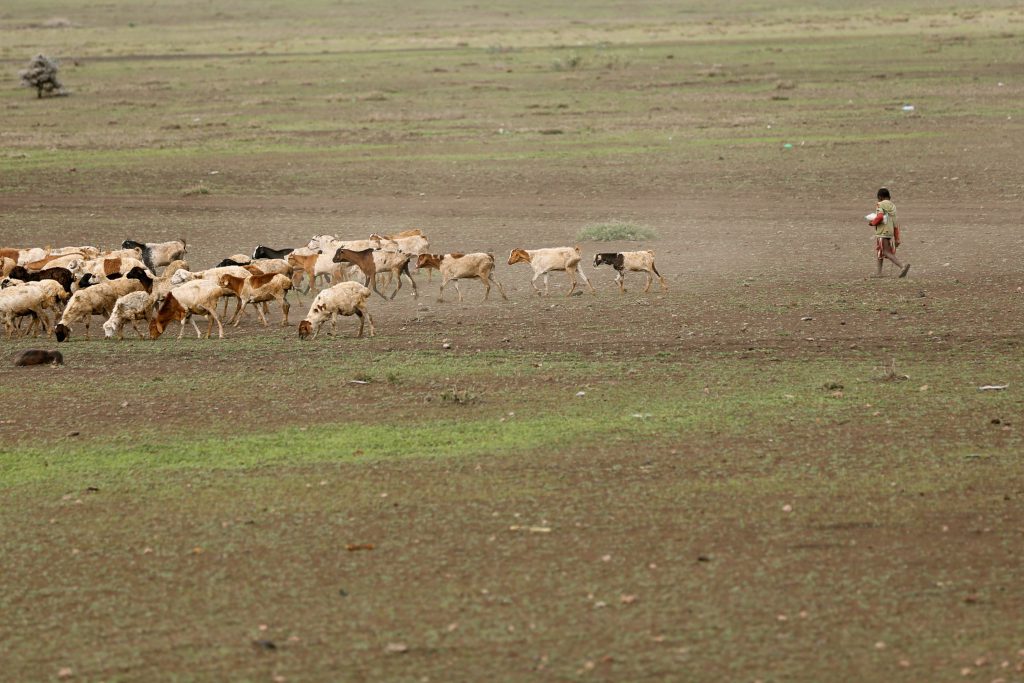 A tribesman herding cows in the Serengeti. Photo by Brandy Little.

He’s a man who has faced off with a lion and won. In an effort to promote conservation, the Tanzanian government has made it illegal to kill lions, but they allow the Masaai tribes to kill a lion if it is attacking their livestock. He lives amongst cheetahs, leopards, hippos, lions, black and green mambas, crocodiles, giraffes, hyenas, zebras, rhinoceroses, water buffalos, and elephants. I would die within hours if I had to walk the paths he has. He does not like spiders though. So I guess spiders can even scare people who can kill a lion with just a spear. 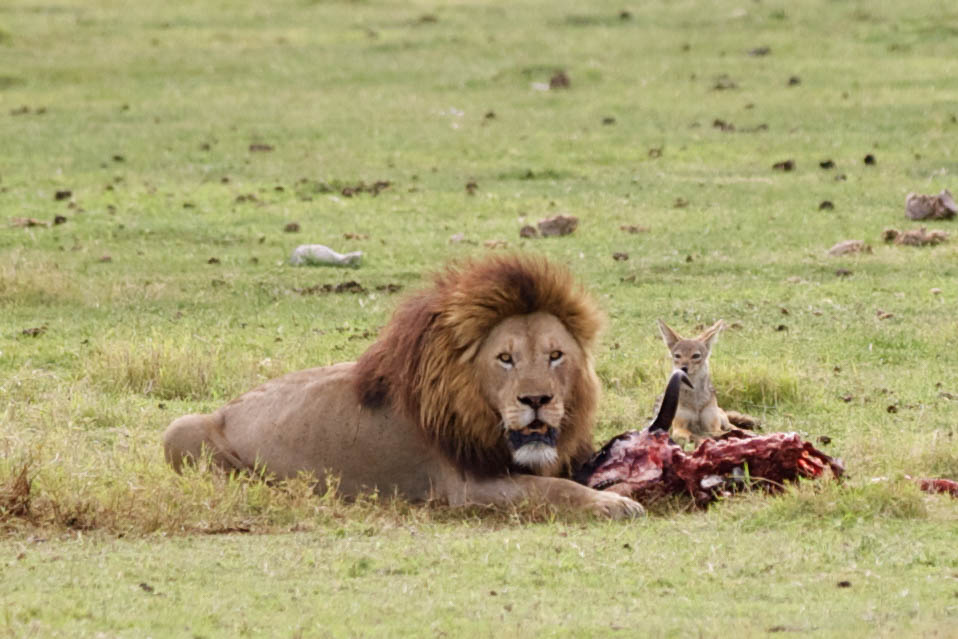 Lion eating in the Serengeti. Photo by Brandy Little.

As foreign as his life was to me, mine was to him. It’s not easy describing a place like Las Vegas, especially to someone that has never experienced anything remotely like it. I explained how Vegas is so bright that you can see it from space. I explained how the buildings were huge and full of glittering machines for gambling, how circus performers drop from ceilings and hold their bodies in incredible positions in the nightly shows, and how hundreds of people pack into a club with booming music and lights twisting along the walls. He then asked me, “Do you have lions?” Well, technically, yes, we have the MGM, but, no, not in the wild. I tried to explain to him animals that he has never heard of, like a rattlesnake and a bear. 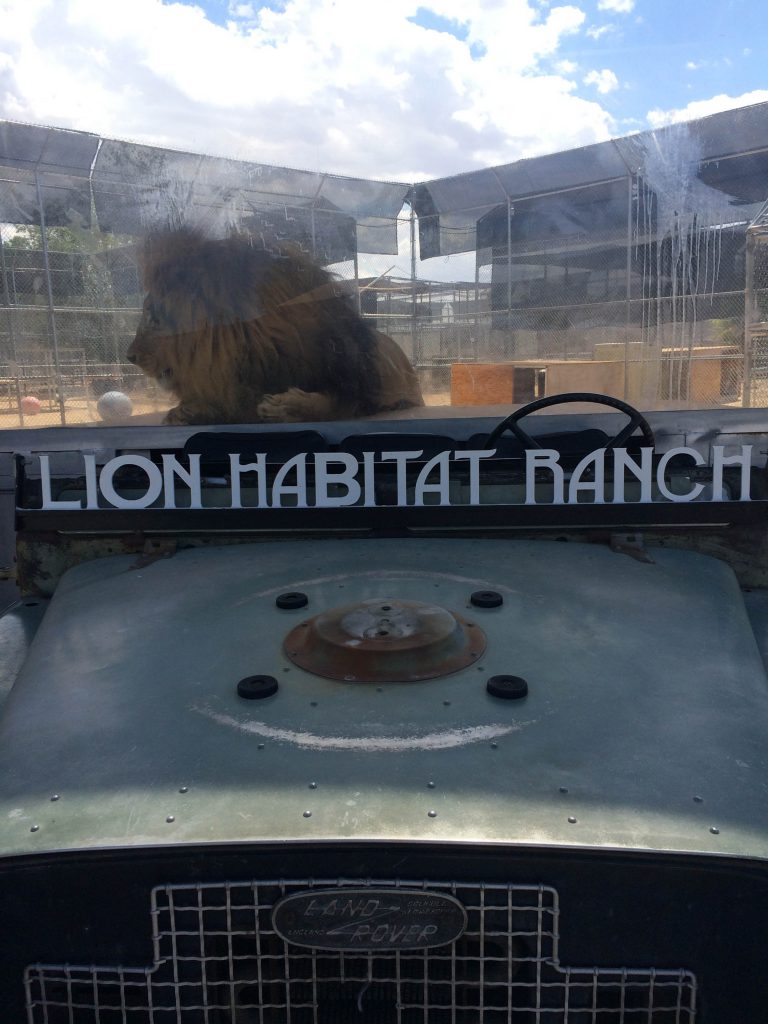 Him not fully understanding where I came from and me not fully understanding where he came from, was fine and understandable and exciting, but it was the next couple reveals and questions that truly saddened me. He then asked me, “If I go to your country, will I be white?” I was baffled, that’s not how it works. “I know in colder places you become whiter.” So, I explained to him that, first off, Las Vegas is actually incredibly hot, with summer average temperatures around 106 degrees fahrenheit (41 degrees celsius) and I told him his skin may slightly lighten if he spends less time in the sun, but it’s not going to fully change and it’s not dependent on your country of residence. “But I would like to be white.” And that’s the part that made me sad. To him, being white offered a life and privilege that he isn’t afforded where he lives. That shouldn’t be the case. We are all human, and treatment shouldn’t vary based on skin color and it kills me that that’s not the case.

I wanted to tell him that it doesn’t matter and that his skin color is beautiful and it won’t prevent him from succeeding in life, but unfortunately, that’s not the case yet, even in my country. But it is important to know that it is the case for many people and places, and that things are getting better, albeit more slowly then I would like. “Do you have black people where you live?” Yes. I live in a country that has a whole mixture of ethnicities. “Can I wear this there,” he said pointing to his shuka. Absolutely.

And so, after a couple hours of talking, we parted. He gave me a beaded bracelet, made with three Masaai colors: blue, representing energy and the sky, white, representing peace and health, and black, representing the struggles we endure. I’ll probably never see him again, but I will never forget him and the way he changed my life. I still may not be able to take down a lion, but I am more human and more connected now because of our time together. Cheers! :::lifts a glass of cow’s blood::: 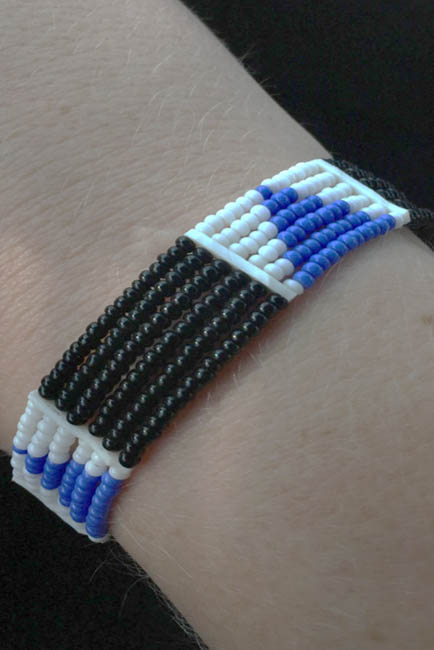 “A gift of travel is the chance to see how different cultures invite love into their lives. Take a second and see how the world around you celebrates love. We are all human. Let this be what connects us.” – Unknown